A major international study, “A Special Report on Xi’an – China’s Western BPO Capital” identifies a new potentially world leading Business Process Outsourcing (BPO) center in Xi’an, Western China – and identifies what the authors refer to as a “New Army in a Modern City”, an Army of bright English speaking graduates and their business leaders who can make Xi’an a global BPO Icon – providing fame and recognition beyond that earned by the world renowned Terra Cotta Army. Xi’an is now a “must include” destination for all BPO Procurement Specialists, CEOs and CIOs, and Outsourcing Advisors 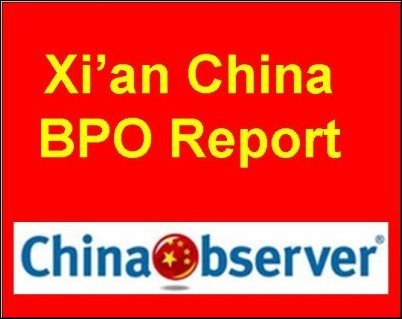 “Xi’an – China’s western BPO Capital”, a new, comprehensive, and “no holds barred” BPO report, shows how Xi’an, the cradle of Chinese civilization and the home of the famous Terra Cotta Warrior Army, has tailored and launched its bid to wrest the crown as the latest “go to” destination for BPO services from its Indian and Chinese competitors. Xi’an is destined to become one of the world’s BPO capitals if a team of successful Chinese business leaders (from overseas and from China) and the far sighted Senior Officials of Xi’an and the Shaanxi Provincial Administration have their way. BPO is a critical focus for the Xi’an team. Already Xi’an is the home to China’s largest indigenous BPO Company which deals almost exclusively services delivered in the English Language (CompuPacific Inc.) and the city is out to aggressively capture further work in this field from across the globe.

The report shows that Xi’an’s uses a Positive Bottom Line Impact to attract business: Competitive Costs, High Quality Labor, Low Labor Attrition, Productivity, Low Overheads, and Investment Incentives. The economics of Xi’an are competitive when compared with India and other outsourcing destinations and among the lowest in China (salaries and overheads are 50 per cent below what they may be in Shanghai and 40 per cent below Beijing rates).

As a result of being one of China’s major academic centers – with more than 700,000 students in further education - Xi’an will lever its abundance of low cost, graduate, and English language experienced labor. Couple these resources with competitive incentives and the backing of China’s National Government and the Shaanxi Provincial Government, and Xi’an cannot help but make a mark in the global outsourcing and BPO market place.

Bill Lewis, Managing Editor of Singapore based China Observer and an international expert in the field of Outsourcing and Systems Integration, says, “In the past three years, the Xi’an Software Park and Hi Tech Zone leaders have caused the opening of over 300 new ITO and BPO businesses serving overseas and domestic markets from Xi’an Software Park. Working with Xi’an’s 100 Universities and further education establishments, who are pumping out thousands of highly competent, English speaking graduates hungry for work in the BPO field, the Xi’an team have put together a formidable initiative to build a global BPO center. As they are rapidly adapting to western requirements, investing in BPO related training, quality certification, and gathering appropriate advice from the international marketplace, they will be highly successful and become a world leading BPO player.”

Xi’an’s bid for BPO fame is driven from Xi’an’s Software Park (a National Software Industry Base and a Software Export Base), located in one of China’s premier centers for science and technology Xian’s Hi-tech Industries Development Zone. The Hi-tech industries Development Zone houses 7500 enterprises, of which approximately ten percent are foreign funded, and it includes manufacturers, research and development laboratories. Information Technology, and now BPO, is considered to be “Pillar Industries.” Xi’an has shown success to date by attracting foreign and domestic investment with organizations such as Intel, Fujitsu, Philips, Sybase, Nortel, Thoughtworks, Agilent, Kingdee, NEC, and Huawe setting up shop.

Xi'an is providing an unusually attractive location by fusing ancient culture (it was China’s ancient capital and one of the four ancient world centers alongside Cairo, Rome and Athens) and modern, hi tech leading edge developments. Xi'an is contemporary and modern with an historical lineage. This can be a winning strategy for Xi’an. Billions of dollars in infrastructure development ensures the city functions easily and well.

Xi’an’s academia is founded on centuries of learning and today graduates students in subjects ranging from Computer Sciences to Biotechnology to Space Technology (it is interesting to note that sixty per cent of China’s latest manned spacecraft – Shenzhou VI - originated in Xi’an’s Research and Development Institutes).

Based on extensive research, “A Special Report on Xi’an – China’s Western BPO Capital” presents new and powerful image of an upcoming global Chinese BPO center. Authored by China Observer’s Managing Director, Bill Lewis, a Harvard Business School Graduate with over 18 years exposure to China and extensive international consulting experience, the 28 page special report is available (free on request) in English and Chinese from China Observer, Singapore. The report is published on the China Observer website – http://www.chinaobserver.cn – under strategy recommendations. Contact with the appropriate Xi’an authorities, to enquire of incentive packages and further information is facilitated through the China Observer office. A synopsis of the Report (pdf) is attached to this Press Release.