The NoThrow® was invented by two sisters as a simple device to prevent babies and children from dropping their bottles and cups. The product retails for less than $10 and was recently cited by national child product retailer The Right Start as "essential for new mothers"--recommending that every new mom have two NoThrows. A unique 13- inch tether and Velcro strap attaches to a child’s bottle or sippy cup and links it to a stroller, seat belt, high chair, or bicycle seat.

An innovative child care product from Detroit-area start-up Twin Beginnings LLC won a huge endorsement this month when it was named to a list of “100 Essentials Every New Mom Needs” by Right Start, the largest retailer of products for infants and children in the nation.

“We are tremendously excited,” said Karla Scanlan of Huntington Woods, who co-created the NoThrow® product (http://www.NoThrow.com) with her twin sister, Karen Kuhn of Chicago. “To see something we invented come to be called “essential” by a huge national brand like Right Start says a great deal about NoThrow.”

Twin Beginnings is currently trying to land another high-profile deal that would place their product in the mega-pharmacy chain Walgreen’s. NoThrow® also received special notice under the Everything for Baby banner at the Juvenile Products Manufacturers Association trade show, and was featured in the “Great Gear” section of Twins, a magazine for parents of multiples.

As with all great ideas, the NoThrow® concept is quite simple. A unique 13- inch tether and Velcro strap attaches to a child’s bottle or sippy cup and links it to a stroller, seat belt, high chair, or bicycle seat. Scanlan and Kuhn literally became mothers of invention after growing tired of picking up baby bottles and cups from dirty floors and sidewalks.

“Gravity is not a concept in toddlers. You find yourself saying ‘NoThrow!’ at least a dozen times a day,” Kuhn observed. Instead of getting mad, the sisters got busy, and their new baby—the NoThrow®—was born.

Retailing for less than $10 and now available in more than 5,000 stores nationwide and even overseas, NoThrow® is catching on. In 2005, Twin Beginnings reported sales that tripled all previous years combined.

Twin Beginnings had more good news when it recently won patent protection for NoThrow®. “Now nobody can copy us. And believe me, people have tried,” Scanlan said.

Winning patent protection and bringing a new idea—even a good one—successfully to market sets Twin Beginnings apart. In fact, an estimated 2 percent of patented products even hit the market, and almost all of those fail. Kuhn and Scanlan relied on a close sisterly bond, hard work, and patience in building up their brand. Of course, the fact that NoThrow® solved a big problem for busy mothers certainly helped.

“This is what every mother has been looking for,” said Jane Eurich, owner of The Purple Bear in Birmingham, Michigan. “(NoThrow) is definitely a hit. I’ve sold hundreds.” Adds Marsha Bernsten, owner of Saturday’s Child in Chicago: “There’s nothing else I have that’s really multifunctional and can attach to other shapes. That’s something that’s unique and special.”

The idea for NoThrow® came together when Scanlan and Kuhn were both raising young sons in 2001. Scanlan had recently moved with her family to suburban Detroit, but the sisters remained extremely close and talked almost daily, taking turns traveling between the two cities to visit several times a year. Naturally, there were many conversations about mothering, and they talked about the need for something to prevent cups and bottles from hitting the dirty floor.

The twins recalled a favorite mantra of their resourceful southern-born mother, Dorothy, (the twins were raised with 9 other children in a small Chicago home), who said ‘If you can’t find it, make it.’ Scanlan and Kuhn worked out a design and began sewing the first NoThrow’s from their living rooms (they later found firms to manufacture and package the product). They started by giving them away to friends, and then, to the sisters’ great surprise, the first stores they contacted placed orders immediately.

Figuring that word of mouth—especially among young mothers—can be a great marketing tool, the sisters began literally giving away NoThrow®. Whenever they saw a mother scrambling to pick up a wayward sippy cup, Scanlan and Kuhn would give them a free NoThrow® on the spot.

“We’re kind of like superheroes,” Kuhn says. “We swoop in and save the day. We still do it. It’s great marketing, and we figure it will pay back in spades.”

Scanlan’s neighbor Anne Nolan recalls being rescued by NoThrow® a few years back. “She handed it to me over the fence one day,” Nolan said. “Now I have five of them in my house and car. I give them away to new mothers. I couldn’t do without it.”

Since those early days, the sisters have become savvy marketers and their business sense has become more sophisticated. In 2005 they found a new, lower-cost manufacturer, and they cut a national distribution deal with Arrow Distribution of Chicago, which brings NoThrow® to such huge national grocery retailers as Kroger, Safeway, and Albertson’s, among others.

NoThrow® can also be ordered online at http://www.NoThrow.com, or by calling Twin Beginnings directly at 248.542.6250. 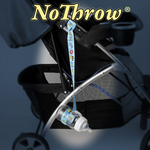