New Book: 'On The Margins -- U.S. Americans in a Border Town to Mexico'

Johannes Wilm gives an anthropological account of the people living in the border town of Douglas, AZ in "On The Margins -- U.S. Americans in a border town to Mexico."

Johannes Wilm gives an anthropological account of the people living in the border town of Douglas, AZ in "On The Margins -- U.S. Americans in a border town to Mexico."

Johannes Wilm, an organizer and activist from Oslo, Norway, goes off to live in and study Douglas, AZ, a border town to Mexico, for half a year. At first sight, Douglas looks like nothing more than a run down company town -- after the Phelps Dodge smelter left in the 1980s. Interestingly though, Wilm discovers that old modes of social stratification disappeared together with the jobs. He looks at the part of the population that is most connected to the United States, and its view of the United States. Is the United States a protector against the poor masses that are streaming in from Mexico? Or is the United States a government and social structure that decides upon local things from far, far away? Wilm claims that "this book has to be seen as a tribute to the progressive sides of what Karl Marx termed the 'lumpenproletariat'."

"This is a well written, experience-near ethnography of marginality in every sense of the word: Douglas is literally on the margins between the USA and Mexico, it is geographically marginal, economically marginal and culturally marginal in the US context. Wilm weaves a convincing and compelling picture of the precarious, reckless and often paradoxical lives led by people in Douglas."

"In line with the tradition of sidetracked post graduate anthropological studies that gave us the lucid works of Carlos Castaneda, Mr. Wilm gives us an insightful, sometimes frightening but always entertaining, look at a small corner of the superpower seldom visited and largely ignored.

At first an outsider in a spiritually and economically bankrupt town in the throes of a major identity crisis, he quickly finds himself part of the bizarre scenery. Wilm 'cruises for chicks' at the local library, is rendered comatose by teenage play station addiction, and jumps into the tumultuous fray of the spring 2004 campaign season registering illegal immigrants to vote.

His chosen setting, Douglas, Arizona, with its population of 14,000 'including the inmates at the state penitentiary', boasts a cast of characters worthy of a Tennessee Williams' play or at least a half hour on Jerry Springer. And despite a repugnance for guns, jingoistic ultra-nationalism, and social injustice, Mr. Wilm forms an unlikely attachment to the place and its people. A must-read for serious anthropologists or the Americo-curious."

Johannes Wilm (1980-) is the son of Danish Pia Wilm and German Gero Wilm. He grew up in the Danish minority with its kindergardens, schools and youth clubs on the German side of the German-Danish border.In high school he discovered socialist ideas as an alternative to the nationalist ideologies many of those around him believed in. And around the time of the Kosovo war, he turned into an activist with the German socialist party Party of Democratic Socialism (PDS). He ran for the Schleswig-Holstein state assembly in early 2000. After graduating, he moved to Oslo, Norway in order to avoid the draft of both Germany and Denmark. He has been an activist in Norway since. In 2005 he earned his M.Phil. in Social Anthropology from the University of Oslo.

On The Margins -- US Americans in a border town to MexicoThis is the front page of the book. 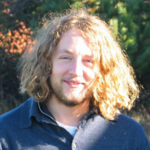 Johannes Wilm, M.Phil. in Social AnthropologyWilm is the author of "On the Margins -- US Americans in a border town to Mexico"