When Arnie Rosner, creator of the RAS Observatory, was asked what was behind this new membership program, he replied, “The idea was to make high-quality astronomy easy and affordable for everyone, no matter where they live or whatever their level of experience. With this new program at RASO we think we have hit the mark.”

It’s a long way from handling customer relations at Sears to becoming The Master of the Universe. But Arnie Rosner has made the trip and is going boldly where no man has gone before.

Once the western territories Operations Manager for Sears Product Services, today Arnie, 69, is the driving force behind the RAS Observatory – a service that allows amateur and professional astronomers to photograph deep space objects using high-powered observatory equipment that users control over the Internet.

So far, he’s been pretty successful; even those with no experience are generally able to connect to the RAS Observatory and begin photographing their choice of nebulas, stars and galaxies in as little as 5 minutes.

Though simple to use, the RAS Observatory is no lightweight. Several subscribers have already used its equipment to discover hundreds of asteroids, confirm over 1500 near Earth orbiting objects and hundreds of previously unknown binary stars.

Remarkably, any user – novice or pro – can join the observatory as a member for as little as $39.98 a month. The monthly membership includes 120 points (2 hours) per month of telescope time plus a 15% discount on any additional time purchased from the existing Rent-a-scope service (http://www.rent-a-scope.com). Members simply log on to the RAS Observatory portal and access the facility’s $500,000 systems.

From Micro To Macro

“I originally was interested in photomicrography,” said Arnie, who’s headquartered in Fountain Valley, CA. “So it was only natural that I eventually expanded my horizons. Initially I took the traditional path and started driving hours to dark mountaintops, lugging hundreds of pounds of equipment, setting it all up. Then I’d sit in the cold for hours just to take one or two photos before breaking everything down and driving back home.

“I finally said there’s got to be a better way, and built a small observatory in my backyard and started using CCD cameras. But the city’s light pollution really permeated the images and partially destroyed the final results.

Over a period of several years I began to develop a more sophisticated approach to controlling the telescopes. I began to network the systems and operate them from an office within my home. Quickly this concept migrated to being able to connect everything to the internet and operate the observatory remotely. At that point I realized it was time to admit defeat over beating the effects of light pollution.”

Rosner went on to say, “I then promptly took the cowards way out and moved the whole observatory to a dark sky site in Arizona. It suddenly occurred to me that I could even take this one step farther; it was now possible to offer access to my equipment over the internet. Anyone could connect with an internet connection and do doing remote astronomy. After about a year of operations I moved again to the even darker skies of New Mexico.”

Arnie added, “Now it was possible for anyone to take incredible intergalactic photos anytime the observatory is in operation, from the warmth and comfort to their own easy chair. This also includes folks with physical limitations and other types of disabilities.” Rosner continued with a big enthusiastic grin, “Not only that but we also teach the users to do the basic image processing as well; it is all part of the service.”

A Star Is Born

Established in 2003 under the distant dark skies of New Mexico, Rent-a-scope, now affiliated with the RAS Observatory has five, remote-controlled, professional-quality Takahashi telescope systems. Each is complemented by a CCD camera and a battery of filters.

“We’re just now finishing the installation of an Australian facility near Queensland that will soon give us remote-controlled Internet access to the skies in the southern hemisphere. Very shortly we expect to be able to offer round-the-clock astronomy to the entire world,” said Arnie.

Today, the RAS Observatory has over 350 subscribers worldwide. The observers are diverse: everyone from college students in the Netherlands and Japan to corporate and academic researchers in the U.S. and teenagers in Finland.

“We have tried to make this as experiential as possible,” Rosner commented, “besides being able to log on for sessions at our observatory; visitors to our website will find numerous references to the discoveries and the images of many of our observers. We have also included news articles, access to free seminars, and bulletin boards for members to share the results of their various research projects.”

The photos at http://www.ras-observatory.org are indeed spectacular; phosphorescent objects like the Horsehead and Rosette Nebula shine in stunning, opalescent detail. And spiral galaxies hundreds of thousands of light years away radiate like delicate starfish in a sea of stars.

“I’m no spring chicken,” said Arnie, “but I’m really passionate about making the RAS Observatory the best experiences anyone can have. In fact, I think I’m the only one out there who offers everyone free 24/7 live personal support.”

And when he says personal, he means it. Arnie answers all calls and handles or oversees all technical support; which means he often gets only two or three hours of sleep a day, catch-as-catch-can.

“So what do I do when I’m not sleeping or working?” said Arnie. “I’m photographing the universe, of course. With this kind of equipment at my disposal, what else would I be doing?” 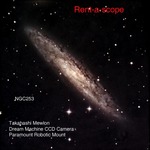 Master of the Universe? Welcome To My Universe Â Arnie Rosner at the Fountain Valley control center of the RAS Observatory which provides amateur and professional astronomers with inexpensive access to Internet-controlled telescope systems for deep space photography.