“Bluewater Seven South From Alaska”, a action/adventure novel by talented new author Don McLain, has just been released by Blue House Publishing. Excerpts and the book cover design can be seen at http://www.bluewaterseven.com

“Bluewater Seven South From Alaska” Is based upon a true story that has been enhanced by fiction. It allows you to enter into the day to day life of offshore oilfield workers as they brave the cold and place their lives on the line to provide the fuel that’s needed to sustain America’s way of life.

Non-stop action as Jeff McDonald leads his crew of men in an epic fight to move an offshore drilling rig in the dead of an Alaskan winter, they will battle the worst nature and man can throw at them as thirty-foot tides and savage currents fight their every move. Snow and ice show no mercy to the crew struggling to move the rig down Cook Inlet to its rendezvous with the heavy lift ship, Swordfish. Rogue fishermen and barroom brawls add to the challenges faced by Jeff and his men. Ferocious storms hammer the Swordfish’s harrowing crossing of the Gulf of Alaska, and at times it seems all is lost as the crew fights to save the rig. They arrive in the placid waters of California only to face a different type of danger.

All the while Scott Parker, an inexperienced shipping agent overseeing the loading of Blue Water Seven onto the Swordfish, faces his own trials as his quest for adventure lands him in more trouble than he counted on. The woman of his dreams leaves him not only heartbroken but broke as well. After a late night encounter with an irate fisherman, Scott is counting the days until he’s back in California.

Born in Montgomery, Louisiana, Don McLain attended school in Atlanta, Louisiana. Don has an Associates of Science degree from Grantham College of Engineering in Slidell, Louisiana. He joined the Air Force while still in high school and went directly into the service after graduation at the age of 17. He served four years as a Munitions Maintenance Specialist. After discharge from the Air Force he worked various jobs until he entered the oil field in the late seventies. He started his oil field career working offshore as a roustabout in the Gulf of Mexico. He has over twenty-five years of experience in the oil field.

Don has backpacked across most of Europe and parts of Africa; and has flown around the world twice. He has lived in Europe, the Middle East, Africa and exotic locations such as the Marianas Islands in Micronesia. He has ridden shotgun on munitions shipments in Europe and worked with conventional and nuclear weapons. He has watched firefights on the Kuwait/Iraq border and missiles flying overhead. He has ridden out hurricanes at sea and ferocious storms in the Gulf of Alaska. He has had to evacuate rigs and countries and has been held hostage by striking African oil workers. He now divides his time between life in a drilling camp in Sub Saharan Africa where he braves malarial infested terrain and renegade government insurgents and a quiet life on a flower farm in South Texas with his beautiful and dynamically intelligent wife of nearly 30 years, who he once threw from a moving train.

For more information, please visit his website at http://www.bluewaterseven.com

The book is now available for order from http://www.bluewaterseven.com, Amazon.com, Borders.com, Barnesandnoble.com and through additional wholesale and retail book stores worldwide. 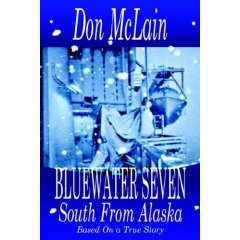