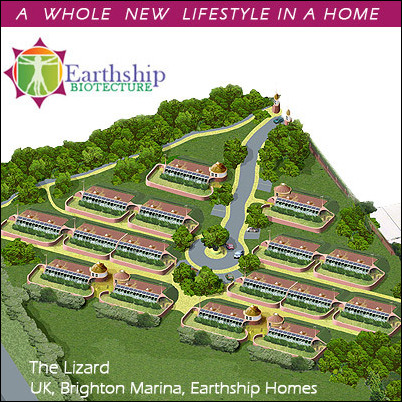 People love the idea of Earthships

Developers Biotecture have today applied for planning permission to construct 16 two and three bedroomed Earthship homes on the seafront site. It will be the first development of its kind in Europe.

The homes are designed to be free of utility bills and ultra low on carbon emissions by heating and cooling themselves, providing their own wind and solar power, harvesting rainwater for domestic use, and containing and treating their own waste.

15,000 tyres will be recycled to construct the homes, at a time when the UK is planning to burn some 40 million tyres each year at great environmental cost.

Biotecture expects the homes to cost between £250,000 and £350,000 and plans to make half of them available to housing associations as affordable units.

Development Director Daren Howarth is confident that homes on the development – named ‘The Lizard’ – will sell quickly.

"People love the idea of Earthships," he said. "We have already received around 100 expressions of interest from buyers.

A successful development in Brighton could pave the way for dozens of Earthship colonies around the UK. It’s a very powerful, iconic building concept that has the potential to revolutionise the way we live."

Biotecture carried out the study in partnership with Brighton and Hove City Council and the Chichester Diocese Housing Association as well as architects and surveyors. The partnership found no barriers to small scale residential Earthship colonies in the UK and earmarked the Brighton Marina site as suitable for such a development.

Two Earthship prototypes – used as office and community space – have already been built at Fife, Scotland and Stanmer, Sussex to demonstrate the potential of Earthships as housing. If planning permission is granted for the residential development at Brighton Marina, construction could be completed and the homes marketed in 2007.

Biotecture’s proposals for The Lizard will be on display at the Ecobuild 2006 sustainable building exhibition at Earls Court on 22 and 23 February and at the Irish Centre, Camden at 6.30 on the evening of the 23 February.

The Earthship concept was developed some 20 years ago by US “biotect” Michael Reynolds. Some 3000 Earthship structures exist globally, mainly in the USA, many of them clustered around the town of Taos, New Mexico.