Still reeling from the Chinese censorship controversy, Google, Inc. has begun blocking objectionable content to protect the concerns of some Muslims.

At what point does a caricature of the prophet Mohammed become offensive? Apparently, Internet giant, Google, has decided to draw the line at 'happy faces'.

This week, online t-shirt vendor MetroSpy (http://www.shopmetrospy.com), posted a shirt design depicting a smiling yellow happy face with a bomb attached to its head -- an obvious parody of the infamous Mohammed cartoon which has caused widespread rioting and outrage throughout the Muslim world.

Although the design itself looks nothing like Mohammed, no beard and no discernible features, the simple inference to the prophet was enough to give Google editorial staff cause for concern.

Johnathan Alexander, production manager for MetroSpy said, “Within days of posting the happy face design, Google censors pulled all of our ads.”

According to Alexander, the new happy face t-shirt had been selling at a rate of about 10 to 15 per day. “With such strong initial sales, we were terribly disappointed to learn that Google objected to our sense of humor.”

“When we first called Google to discuss the issue, nobody would talk to us.” Alexander said. “It took several hours before we finally learned that our advertisements may resume as soon as the Mohammed happy face design was taken down from our website.”

In a statement issued by the company, Google writes, “We believe strongly in freedom of expression and therefore offer broad access to content across the web without censoring search results. However, due to the sensitivity of the recently published Danish Mohammed cartoons, we are not accepting ads with this content.”

Alexander insists, there is nothing offensive or rude about the new happy face design. “It's a yellow happy face! If Google editors can see blasphemy in that, they've got bigger problems than I do,” he said. "We have no intention of removing the design from our website so, we'll just have to spend our ad dollars somewhere else."

This new controversy comes on the heels of strong criticism of Google by US lawmakers for yielding to Chinese demands to censor search results so that sensitive words such as 'democracy' and 'Tiananmen Square' were removed and not seen by Chinese net surfers. 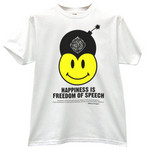