First online gamer crucified in Roma Victor, a Roman themed online game. Player was punished for cheating during the current beta test for the Roman MMORPG or virtual world. The game launches on July 1st 2006. 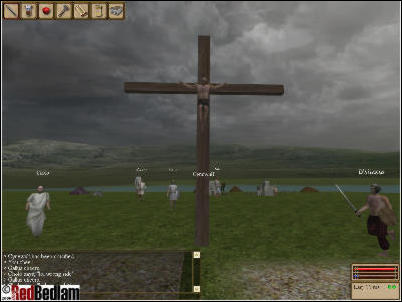 Ancient punishment is handed out for the all-too-modern crime of ganking (or gang-killing new players) as Roman-style justice returns to Britain for the first time in nearly 20 centuries.

Britain will witness its first crucifixion for almost two millennium later this week, when Cynewulf is nailed to a cross as punishment for ganking other players as they first appear. Cynewulf,(in real life a 27-year-old electrical engineer from Flint, Michigan, USA) has no need to worry about suffering any permanent pain to his hands or feet, however, as this barbaric sentence is due to be carried out in cyberspace; in the virtual world of Roma Victor. ®

Roma Victor is an online recreation of Britain in Roman times, where players live virtual lives as slaves and citizens of that all-conquering Empire. The world is currently in the final stages of testing and will officially launch on July 1st 2006, after which thousands of players will be able to live out their own virtual lives within ancient Roman-occupied Britannia.

Cynewulf, who is the first player within Roma Victor to receive this brutal punishment, will be hung on a cross for a full seven days on full public display in the digital reconstruction of the provincial town of Corstopitum (modern day Corbridge in Northumberland, England).

Kerry Fraser-Robinson, RedBedlam’s CEO says: “Roma Victor has been designed from the outset to offer an historically authentic and realistic virtual world. Although crucifixion is nowadays synonymous with persecution and religious symbolism, in 180CE it was just one of many severe punishments used by the Romans to punish criminals and to send a clear message out to other potential wrong-doers. And since our online world is historically authentic, we feel that applying this punishment to cheats, hackers and other virtual wrongdoers is not only appropriate, but also adds to the gaming experience by resonating with classical history.”

Crucifixion is to be used as a form of player 'ban' within the virtual world of Roma Victor, with the length of the ban reflecting the severity of the punishment. For cheating by exploiting a bug and advancing his or her character's skills unfairly, for example, a player might typically receive a seven-day ban; multiple or more serious offences will result in a longer (or even permanent) ban.

Further information on this story and Roma Victor in general can be found online at http://www.roma-victor.com/news

Note to editors: RedBedlam Ltd. was founded in 2001 in order to create virtual worlds and to realise virtual economies. The company's pilot project, Roma Victor® is a non-fantasy MMORPG set at the height of the Roman Empire circa 180CE. RedBedlam is a fully independent privately held company, which remains totally committed to the principals of community involvement and inter-dependence.

Britain to witness first crucifixion in almost 2,000 years!Roma Victor to crucify first online gamer for ganking new players. A player in the current beta test for the Roman themed MMORPG or virtual world to receive the online punishment next week.

Screenshot of online crucifixionRoma Victor crucify first online gamer during the beta test of the upcoming MMORPG or virtual world. The player was punished for ganking new players