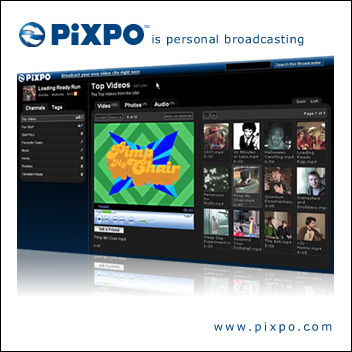 The Tom’s Hardware community is one of the most influential and tech-savvy audiences on the Internet. TwitchTV will enable our community to easily and effectively deliver their own video, images, and audio content to our worldwide audience of over 10 million computer enthusiasts and professionals

The “Idol” generation of online extroverts now has the ultimate tool to express themselves. With PiXPO, anyone can broadcast video, photos and audio directly from their desktop to the Internet. Bucking the trend towards the hosted video model, PiXPO enables the effective broadcast of unlimited amounts of personal media from a user’s own personal broadcast site.

PiXPO shatters all technical barriers to entry for users who want to broadcast video and media web sites. Broadband PC users can create a broadcast site within minutes, something that would otherwise take hours and significant technical expertise.

PiXPO’s personal broadcast software and unique hybrid content delivery network allows users to broadcast their channels directly from their PCs and will soon let users monetize their own content. Users face no limits to the size or amount of digital media content they broadcast and avoid the entire upload process. PiXPO takes a very complex process and makes online broadcasting virtually instantaneous for consumers through industry-leading Peer2Web, caching and streaming technology.

PiXPO CEO Ron Stevens says, “By 2009, there will be over 2 billion PC and CE devices capable of capturing, sending or receiving Pixpo personal broadcasts. The market potential for instant personal broadcasting of consumer news and events will become enormous with the rapid proliferation of new content capturing devices and better broadband services. With PiXPO and its upcoming mobile technology, any user can easily broadcast unlimited amounts of content to their personal communities or to the entire Internet.”

Another first for PiXPO’s Peer2Web technology is the ability to broadcast directly into consumer portals, a feature which will be launched in partnership with Internet powerhouse Tom’s Hardware (http://www.tomshardware.com) within the TwitchGuru portal.

“The Tom’s Hardware community is one of the most influential and tech-savvy audiences on the Internet. TwitchTV will enable our community to easily and effectively deliver their own video, images, and audio content to our worldwide audience of over 10 million computer enthusiasts and professionals,” says Omid Rahmat, CEO of TG Publishing.

Pixpo’s aim is to turn the broadcast model upside down by enabling effective broadcast into focused communities. Pixpo is a technology leader in the digital media broadcast industry and is moving towards a Web 2.0 platform to be launched later this summer. PiXPO is a recipient of PC Magazine’s Editor’s Choice Award and has won numerous top industry awards with their earlier PiXPO product.

PiXPO channel manager This is a screen shot of the channel manger in the PiXPO software.