Legendary Golfer, Calvin Peete gets back into the game of golf by joining TGA, Tournament Gifts of America's.

Mr. Peete commented, “I have first hand seen what TGA can do to benefit charities. As involved as I am with The First Tee of Jacksonville, it became very clear that Mike Lattuca, Founder and Chairman at TGA has created a business model long needed in the golf tournament industry.” Mr. Peete went on to say, “The passion Mike emits is contagious and essential in building something great. His vision to consolidate this business with the best pricing guaranteed is nothing less than revolutionary. I am proud to be affiliated with TGA and quite honestly I am excited to be part of a focused, determined and “Winner” business model. It’s great to be back in golf and I feel TGA is the final pairing on Sunday afternoon. TGA came out of nowhere to dominate in short fashion and will continue to grow, saving charities valuable dollars. I know this first hand and recognize the value Mike’s company offers and the opportunity he’s created within the golfing community.”

Mike Lattuca, Chairman and C.E.O. commented, “What can I say? The Calvin Peete we all watched dominate everyone on tour from 1982-1986 is on the TGA team. I am very flattered he would accept this position and truly feel his involvement will add tremendous credibility to the already successful TGA model.” Mr. Lattuca continued, “Calvin is one of many who work within local charities to give back. His excitement to give to the inner city children in Jacksonville is incredibly valuable to the long term success of our community. He introduces youngsters to the game and gives them access to play and practice that under normal conditions wouldn’t exist!” “I am very proud to have Calvin working with us. Additionally, at 62 he’ll still hit 14 out of 18 fairways in regulation, and of course on in regulation for the remaining 4 par 3’s, as witnessed last week. Calvin is a true living legend and more importantly a gentleman.

About Tournament Gifts of America

Tournament Gifts of America, headquartered in Ponte Vedra Beach, Fla, is located inside Sawgrass Village across from TPC Sawgrass and the PGA TOUR. TGA is the largest provider of tournament merchandise in the United States and has consolidated the industry with unparalleled pricing and service, from tee prizes, trophies, awards, signs, banners, hole-in-one insurance, and more. TGA’s moto is, “We’ll Beat Any Competitor’s Pricing – Guaranteed.”

About Calvin Peete: Mr. Peete is still listed number one in Driving Accuracy percentage having played in 56 events on the Senior PGA Tour his average of 80.9% still leads the pack. Mr. Peete led the Senior Tour in driving accuracy, a category he dominated on the PGA Tour for 10 consecutive years (1981-90), with an 81.4 percent mark in 1994. The winner of 11 tournaments in a five-year stretch on the PGA Tour he was super during that stretch and finished with 12 career victories. Mr. Peete's most prestigious victory came at the 1985 Tournament Players Championship. During 1982 Mr. Pete won four times at PGA events. Mr. Peete only the second African American to play on the United States Ryder Cup team, played in both the 1983 and '85 Ryder Cups. 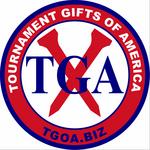