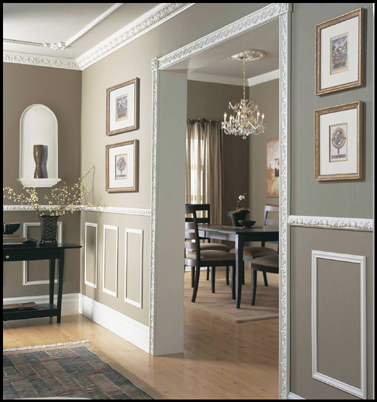 If there were a list of tools that homeowners loathed, the miter box would certainly near the top. Making precise 45-degree cuts proves elusive for all but the experts. If they are off by even one degree, the corner will be noticeably off kilter. New advances are occurring in the direction of simplifying interior room design. Easy-to-install, corner blocks for polyurethane moldings offer a great deal of encouragement to D-I-Y-ers.

Until recently, the standard way of getting architectural moldings installed was to hire a contractor who needed to make complex measurements and multiple saw cuts. There of course is also the greatly increased cost, and the hassle of having a stranger in the house doing the work to consider.

Architectural Ornament is the first manufacturer of polyurethane moldings to provide matching, ready-to-use corner blocks, which are short pieces of molding created for the sole purpose of laying molding in and around corners without the need to do compound mitering. A straight cut on any saw is all that’s needed to create perfectly matched corners.

The ability of these corner blocks to mate well with their corresponding horizontal lengths of molding lies with the production process involved in making urethane decorative moldings. Die cut molds (as opposed to the milling process used for wood) ensure consistent dimensional stability as well as sharp detailing. The closed-cell nature of polyurethane also accounts for the fact that the material saws easily without splitting.

Polyurethane moldings are rapidly taking the place of wood as the better-performing choice as they won’t warp, rot or split and are moisture resistant because of the closed cell structure of its material. Because polyurethane products are molded, manufacturers are able to provide intricately detailed, yet sharp, features, permitting a wide variety of attractive patterns -- many of them so uniquely artistic as to be copyrighted.

Companies like Architectural Ornament are simplifying the finishing process as its polyurethane moldings come pre-primed and ready to paint. With urethane decorative moldings, nail holes can be filled with spackling as opposed to wood, which calls for wood fillers that tend to shrink and fall out. In effect, the turn to polyurethane has allowed molding manufacturers to perform much of the up-front work for homeowners, which is, according to recent findings, the answer to their prayers.