Innova Recordings has just released "Fallen Sparrow", a new CD with music by Barry Schrader. This is the fourth CD of Schrader’s music released by Innova, and the first to present works for live performers in combination with electro-acoustic sounds.

"Love, In Memoriam", a short song cycle for voice and electro-acoustic music, was commissioned by the Institut international de Musique Electroacoustique in Bourges, and is performed by the late countertenor Frank Royon Le Mee. Based on poems by Michael Gluck, each of the three sections deals with defining moments in the lives of Vincent van Gogh, Lewis Carroll, and Leonardo da Vinci.

"Fallen Sparrow", stunningly performed by violinist Mark Menzies, stems from Schrader's discovery of a dead sparrow who made its final nest in a protected corner of his house. The main sections of the work ("First Spring", "Mystic Night", "Soaring Flight") arise out of Schrader's imagining what the sparrow's final thoughts might have been as it lay dying.

Clarinettist William Powell grandly performs "Five Arabesques", a group of short pieces based on a brief turning musical figure analogous to the ornamental designs in Moorish or Arabic decoration. Each of the five movements are unique and present a panoply of clarinet performance styles and techniques. Los Angeles critic Dan Krimm has written "Barry Schrader's 'Five Arabesques' is a set of musical miniatures set to electro-acoustic backgrounds with an impressive range of settings from rhythmic and syncopated to shimmering/ fluttering, ethereal, groove-like and a sort of rondo form at the end with an orchestral theme surrounding separate sections of playfulness, flourishes, and contemplation, all executed with rich and juicy sonic textures."

The final work on the album, "Ravel", is played with great elan by pianist Vicki Ray. This work is based on short excerpts from the works of composer Maurice Ravel. The intention is not to imitate Ravel's style, but rather to create a sort of homage by using the original musical materials as points of departure for creating something new.

The "Fallen Sparrow" CD is available from regular and online stores (including iTunes) as well as directly from Innova at http://www.innovarecordings.com/artist1.asp?skuID=257.

Excerpts from works on the "Fallen Sparrow" CD are available on the "Downloads" page of Schrader's website at http://barryschrader.com/download.html.

Barry Schrader has been acclaimed by the "Los Angeles Times" as "a composer born to the electronic medium", named "a seminal composer of electro-acoustic music" by "Journal SEAMUS", and described by "Gramophone" as a composer of "approachable electronic music with a distinctive individual voice to reward the adventurous". "There's a great sweep to Schrader's work that puts it more in line with ambitious large-scale electronic works by the likes of Stockhausen ("Hymnen"), Eloy ("Shanti") and Henry (take your pick), a line that can be traced backwards to Mahler, Bruckner and Beethoven.." writes Dan Warburton of the "Paris Transatlantic Magazine".

Schrader's compositions for electronics, dance, film, video, mixed media, live/electro-acoustic music combinations, and real-time computer performance have been presented throughout the world. He has received recognition in the form of grants, awards, and commissions, from numerous organizations and has recently been awarded a Copland Grant through Innova Recordings. Active in the promotion of electro-acoustic music, Schrader is the founder and the first president of SEAMUS (Society for Electro-Acoustic Music in the United States). He has been involved with the inauguration and operation of several performance series such as SCREAM (Southern California Resource for Electro-Acoustic Music), the Currents concert series at Theatre Vanguard (the first ongoing series of electro-acoustic music concerts in the U.S.), and the CalArts Electro-Acoustic Music Marathon.

He has written for several publications including "The New Grove Dictionary of Music and Musicians", "Groliers Encyclopedia", "Contemporary Music Review", and "Journal SEAMUS", and is the author of the book "Introduction to Electro-Acoustic Music" . He has been a member of the Composition Faculty of the California Institute of the Arts School of Music since 1971, and has also taught at the University of California at Santa Barbara and the California State University at Los Angeles. His music is recorded on the Opus One, Laurel, CIRM, SEAMUS, Centaur, and Innova labels. His web site is http://www.barryschrader.com/. 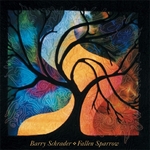