Senseless Tragedy Leads Deep into the Spirit of Family

A deeply personal, frank portrait of one family not only coming to terms with its grief, but also celebrating its past and difficult present. This collection of poems strike poignant and universal chords offering a vision of life filled with little treasures that carry us back to what is truly important in our lives

On August 16, 2004, Julia Ann Thompson, 61, was killed in a car wreck. Julia's work as a world-class physicist coupled with her far-reaching social efforts for equality and justice made a profound difference in the world. Julia's husband, Dave Kraus, and mother, Ruth Thompson, were also severely injured in the accident, yet through months of skill, care, and willpower, recovered from their injuries. This tragic and unexpected accident shook the Riehl’s family at its foundation.

In the year following Julie’s death, sister and author, Janet Riehl moved back to her Midwest childhood home of Evergreen Heights, Illinois to be with her family during this time of shock and grief. The unique ancestral home place, pioneered in the 1860s by Riehl’s great grandfather, provided the comfort and warmth needed by this family to come together, grieve, and redefine their lives for the future.

Inspired to write since childhood by her writer father, Riehl penned a six generational family memoir told through story poems in “Sightlines: A Poet’s Diary” (ISBN 0595374999). The work of one woman’s search to find meaning in a senseless tragedy, “Sightlines” strikes universal chords revealing the cycles of human life such as caring for parents, aging, death, and bereavement as well as the ways in which they strengthens family spirit. “’Sightlines’ shows how we moved through important stages of grief and became stronger as a family,’ explains Riehl. “Not all families have such deep roots, but since ours does, it makes a perfect textbook for life cycles and the importance of memory.”

“I wanted to use the work as an act of healing for my family, the larger human family, and myself,” adds Riehl. Twenty-five photos from the family archive are featured in “Sightlines: A Poet’s Diary” punctuating the 90 poems giving an amplified sense of time and place. “Memories” is a significant underlying theme throughout this collection, and through the experience of Riehl’s poetic diary, readers will find new meaning to their own life experiences and the lasting memories that radiate each and every day. “My wish is that you will come to a deeper appreciation of your parents, your family, and your own place within it,” concludes Riehl.

Janet Grace Riehl graduated from Alton High School in 1967. She received a Master’s in English from Southern Illinois University Edwardsville and co-edited its poetry magazine, Sou’Wester. She lived and worked five years in Africa volunteering first for Peace Corps and later for British World Friends (Quakers). Riehl supported herself for decades teaching and writing for business and education. The Kellogg Foundation sponsored Riehl as a Fellow in International Development focusing on Latin American culture. She now lives in a rural area in Lake County in Northern California, where she operates Rocking Triangle Studio and sits on the board of EcoArts. This spring she was named as a finalist for the poet laureate of Lake County. “Sightlines: A Poet’s Diary” (ISBN 0595374999) can be purchased at online bookstores. For more information or to contact Riehl, go to http://www.sightlinesbook.com which has photos, background information, a blog, reviews and more. 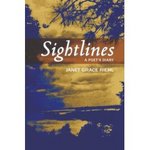