A Piece of History for Sale in Upstate New York

Trenton Falls revival offers opportunity to own a historic property located at the foothills of the Adirondacks. 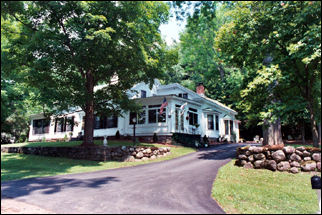 Heralded by royalty and visiting dignitaries since the 19th century, the natural splendor of Trenton Falls in upstate New York is experiencing a tourism revival thanks to a partnership between Brascan Power Corporation and the town of Trenton to reopen the falls and scenic hiking trails to the public.

For nearly 100 years, local residents were banned from viewing what has been called the “second wonder of the world” – the picturesque landscape of Trenton Falls gorge at the foothills of the Adirondack park. The West Canada Creek cascades through the gorge, spilling several hundred feet to create the breathtaking falls. Once a world-famous retreat, the falls attracted artists, poets and the wealthy. Geologists have studied the fossils embedded in the limestone of the gorge which date back 450 million years. The site was also used during the Civil War as a meeting place for diplomats from many nations to ensure that they supported the cause of the North and not the Confederacy.

Trenton Falls homeowner J. Eaton purchased her historic property in 1981. “The land in our area is all part of the Third Royal Grant of 1795 from England’s King George,” Eaton explained. “Trenton Falls is rich in history,” she continued. Tourism at the falls began in 1823 when John Sherman built the Rural Resort. Sherman first viewed the falls during an 1805 visit from Connecticut. He blasted a path to the falls in 1808 with money donated by Joseph Bonaparte, brother of Napoleon.

“We realized the richness of the area and the potential of the house when we purchased it” said Eaton of her 1808 colonial known as Sunset Hill. The Eatons spent the last 25 years renovating the 3,800-square-foot home set on 8 acres of secluded pristine woodland which captivates with its stone walls and circular driveway.

“We have kept the integrity and charm of the house in mind while restoring it,” Eaton noted. With a thoughtful combination of old and new, Sunset Hill boasts three fireplaces, a modern kitchen with granite counter tops and a master suite with fireplace and French doors leading out to a sleeping porch. The four-bedroom home also features renovated bathrooms with antique claw-foot tubs, a fitness room, formal dining, French doors opening onto a sun porch as well as a three-stall detached garage.

Published by ASMarketingCenter.com a division of AuctionServices.com, Inc. and NationalAuctionList.com.