Humorist Case Wagenvoord pinions the Bush administration’s abuse of power, its mendacity, and the commodification of American life.

If politics is a hot air balloon, satire is the pin that pricks it. Satire is anger wrung dry until only a sardonic humor is left. It relies on caricature and exaggeration, both of which contain an element of truth.

Anger drives the satire of Case Wagenvoord. His mouthpiece is Bush’s shadow advisor, Belacqua Jones, a Karl Rove on methamphetamines. His book, Open Letters to George W. Bush is a collection of Belacqua’s letters to the president that give a distorted view of the world through a lens cracked by too many controlled substances and a Neocon ideology run amok.

Belacqua urges the president to save Social Security by making smoking mandatory for the children of America, to shoot Jesus full of theological steroids, and to establish “Free Speech Camps” for dissidents, critics and progressives. In short, Wagenvoord’s book promises to both entertain and offend.

Wagenvoord’s wife worked in the South Tower of the World Trade Center and was running late the morning of 9/11. She was a block from the WTC when the first plane struck and lost fifteen to twenty friends in the tragedy. “Open Letters was born of the anger I felt over the invasion of Iraq, which had nothing to do with 9/11,” adds Wagenvoord. Neither a liberal nor a conservative, and with an inherent distrust of ideologies, Wagenvoord concludes, “I believe deeply in a democratic republic and the rule of law. It saddens me to see both being eroded.”

Wagenvoord worked his way through college as a newspaper reporter following five years in the Marines. He has a BA in Political Science from Earlham College in Richmond, Ind. and a MA in Liberal Studies from The New School for Social Research in New York City. Currently living in Middletown, New Jersey with his wife, Wagenvoord is a special education teacher in Brooklyn and will be retiring this year. He will be devoting his newfound time to writing and babysitting his granddaughters. Open Letters to George W. Bush (ISBN 0595361978) can be purchased at online bookstores. For more information go to http://www.belacquajones.com and http://blogs.salon.com/0004024. 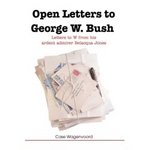