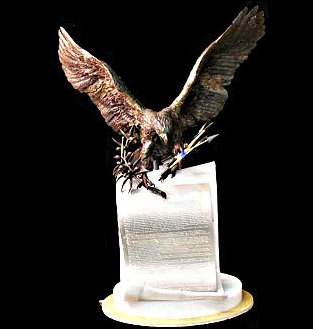 A fly-fishing cowboy from Jackson Hole, Wyoming is preparing a trek across America with a sculpture of the Constitution and the American Bald Eagle. Drift boat in tow, this country boy is headed for Washington DC. “When I get to New York City I’m going to float down the Hudson River into New York Bay and around Liberty Island,” Roberts said.

Gale Roberts is on a mission that will take him through 17 state capitols in 16 days to show State Governors, President of the United States, Members of Congress, Supreme Court Judges, and more especially the American people, Lorenzo Ghiglieri’s latest masterpiece appropriately named the “American Patriot.”

Lorenzo’s work graces the walls of the most prestigious establishments in the world. His sculptures and paintings have been presented to Pope John Paul II at The Vatican in Rome, President Ronald Reagan at the White House, Mikhail Gorbachev of the Kremlin and King Juan Carlos of the Royal Palace in Madrid. Luciano Pavoratti, General Schwartzkopf and Tiger Woods are a few others who take pride in their ownership of a Lorenzo Ghiglieri sculpture.

At 22 years old in 1953, while serving in the U.S. Navy, Lorenzo received an important commission from the United States Government to paint what became a gift to Great Britain as the coronation for Queen Elizabeth II. In 1994, Lorenzo sculpted the “Official American Bald Eagle” which is now part of the permanent White House collection.

Now in his golden years, this master artist has created perhaps his greatest work ever called the “American Patriot." According to Roberts, “After numerous portrayals of American eagles, this bronze is much more than a brilliant portrayal of our national heritage; it is 75 years of American patriotism and personal experience molded into a sculpture that resonates with American pride.”

This world-renowned artist is genuinely respected for his unmatched ability to flawlessly capture the anatomy of his subjects. Yet, it is Lorenzo’s intent to remind Americans of the importance to protect our freedom and liberties, and to honor the commitment to those who have served our great nation, that truly brings the “American Patriot” to life.

“I honor the sacrifices my fellow Americans have made when they are called upon to serve our country. I also deeply respect the commitment that young men and women have made when called to duty at the prime of their lives. And yet, while it is the veterans who have made the ultimate sacrifice for our nation with their lives, as the protectors of our rights and liberties, we must never forget the sacrifices that all Americans have made, including their families.

"I truly believe in the United States of America and all that it stands for… as a nation guided by the wisdom in God, with liberty and justice for everyone. The “American Patriot” emphasizes the liberty and freedom we have and to reminds us the responsibilities that we have been called upon to protect them.” -- Lorenzo Ghiglieri

Roberts is so passionate about the powerful message the “American Patriot” offers Americans that he believes it belongs in every government building in the United States. So in August, he put a team together and started contacting the White House, Supreme Court Judges, US Congressman, Governors and State Legislatures. After thousands of emails, voice mails, faxes and phone calls, only to end up at a stone wall.

Roberts claims that if you were to go through the frustration we have gone through of trying to get a phone call through to Governor Schwarzenegger’s office; or having your comments to a representative being rejected because you weren’t in their district, you too would be hauling this masterpiece across America.

Why a drift boat? “Because I don’t have a pickup to haul it in.” Roberts said. He continues, “Besides, I look forward to rowing the “American Patriot” down the Hudson River and around the Statue of Liberty. I can’t think of a better way to complete a 4,500-mile commemoration of the “American Patriot” than to take its picture at one of the most coveted symbols of our nation’s freedom, the Statue Of Liberty."

On September 20, 2006 the American Patriot Road Tour will begin in Lorenzo’s home state of Oregon. The drift boat with the 44” tall, 225 pound “American Patriot” proudly perched in the front seat, will be at the steps of Oregon’s State Capitol in Salem at 9:00 am and then on to Olympia, Washington for a 4:00 pm engagement at the Washington State Capitol.

The next morning, September 21st at 10:00 am, it will be in Sacramento, California for a preview for Governor Schwarzenegger and the California Assembly. Later that afternoon it will be in Carson City, Nevada at the steps of their State Capitol at 4:00 pm. Roberts said he wanted to drop down into California before he headed to DC because he thinks Governor Schwarzenegger is already an owner of Ghiglieri art. “I can only hope he has a chance to see it on such a short notice.”

Too short of a notice for most governors has proven to be quite a challenge so far for Roberts and his tour manager, Tom Rucker. Yet, all the scheduled stops across the United States will still occur, as Roberts claims his mission is much greater than just showing it to the governors. “I wanted the Governors to see the “American Patriot” in person because I feel this masterpiece belongs in all 50 state capitols. While I would like each governor to take 10 minutes to see it, I am equally looking forward to showing the “American Patriot” to the American people across the United States. I can’t wait to parade through the cities across the nation paying tribute to this masterpiece and to patriotic Americans across the United States.”

What about the other 33 states? Roberts said we will be visiting all 50 State Capitols by the end of December.