"Kakistocracy" (rhymes with "democracy" -- means government by the most corrupt and incompetent)is an Americana CD that surveys an America gone wrong.

But instead of pointing fingers, the CD includes a cycle of songs which are slices of life -- sometimes sly and satirical, sometimes blunt as the muzzle of an M-16. The cast of characters range from Iraq War grunts more interested in staying alive than promoting democracy -- to trailer trash-talking mamas getting jacked up on the home front.

The collection is the brainchild of a musical odd couple.

a Texas-sized wealth of talent for the project. Jamie Oldaker (drummer on Eric Clapton's classic '70s albums) drives the songs with a swamp arab beat. Also featured are Americana favorites Elana Fremerman (Hot Club of Cow Town, Bob Dylan), and Garth Hudson of The Band. Spurlock also roped in Leon Rausch (legendary singer of Bob Wills and the Texas Playboys) to sing "I'm A-Going Down to Crawford, Texas(Gonna Talk to the President)."

The CD has garnered rave-reviews for its no-punches-pulled approach -- think Stephen Colbert in a cowboy hat. While the songs are anti-Iraq War and anti-Bush, they move beyond ad hominem attacks to take aim at the moral fog of an America that gave rise to W and his War.

Stewart Mason of All Music Guide writes: "just the sight of (Kakistocracy) will make the average Fox News viewer's head explode, but for all of those who have been complaining that there's no protest music coming in response to this war like there was to Vietnam...well, here it is."

Blogcritics.org summarizes: "the angry populist message of Kakistocracy: We're being played for fools by fools -- and we want to know why."

Kathy Coleman of About.com raves: "All in all, when it comes to making music, I have to give these guys two thumbs up -- when it comes to speaking up about what's wrong, I don't have enough thumbs to give."

The album should also appeal to fans of classic Americana

music: the eclectic mix of radio-ready tunes range from quiet acoustic meditations to flat-out alt-country rockers fueled by Spurlock's over-driven steel guitar (in homage to his mentor Sneaky Pete Kleinow of the Flying Burrito Brothers). And while the breadth of talent alone should be worth the price of admission, everybody who participated in the project put on their spurs and came ready to play.

The CD is released under the imprint of Austin Records (Omar and the Howlers). "Kakistocracy" is the first release of the revitalized label and is distributed by Burnside Distribution; the album is available digitally on I-Tunes and other digital music stores.

For more information go to http://www.spicewoodseven.com/ 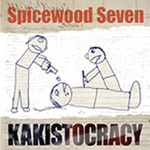 A simple definition.For a complex word.

Crawford Texas"Don't wanna dance with those hippie girls/all I wanna know is how in the world/we gonna win this war?"

Half Mast"Rich bitch high in her SUV/W sticker between her knees/wraparound shades, talking on her cell/driving like she owns an oil well"

Kakistocracy Mission StatementThe how and the why.