George Lopez's new album "El Mas Chingon" was released on September 26th and debuted at #1. "El Mas Chingon" is the follow up to the Grammy nominated CD "Team Leader" and is currently a contender for "Best Comedy Album" Grammy for 2006. Lopez is also the star and co-creator of the hit ABC sitcom, "George Lopez Show" that will be entering its sixth season this fall. 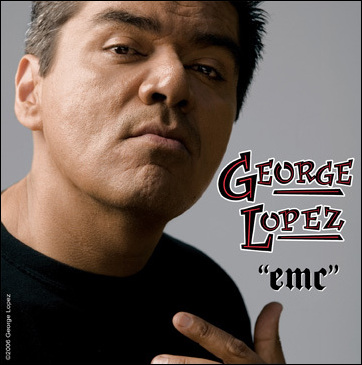 The 25 Most Influential Hispanics In America

George Lopez's new album "El Mas Chingon" was released on September 26th and debuted at #1 on the Billboard Heatseekers Chart and #3 on the Comedy Chart. The Grammy Award nominated comedian also has the ongoing comedy tour of the same name, which includes six sold out shows at the Gibson Amphitheatre in Universal City. "El Mas Chingon" is the follow up to the Grammy nominated CD "Team Leader." The new album marks Lopez's fourth release with Oglio Records and is currently a contender for "Best Comedy Album" Grammy for 2006.

Lopez is the star and co-creator of the hit ABC sitcom, "George Lopez" that will be entering its sixth season this fall. Having become one of television's biggest celebrities, Lopez recently was bestowed with a star on the Hollywood Walk of Fame. In addition to his success on the small screen, Lopez maintains an extremely active schedule as a stand-up comedian, selling-out prestigious arena venues coast-to-coast. With his new comedy album, George's observations on Latino culture and his own life reveal him to be one of the most real and honest comedians working today.

Currently in the works is a documentary entitled, "Brown is the New Green," which will air nationally on primetime PBS about how American media and Hispanic marketing are shaping the contemporary Latino identity. The documentary's primary focus will be on the making of "The George Lopez Show," the most popular English language Latino show in the history of American television. It will feature conversations with George Lopez and other key figures in the making of the show as well as marketers, programmers and members of the much coveted Latino market.

Lopez will perform at The Comedy Festival in Las Vegas for the 20th Anniversary of Comic Relief. In addition, he will host "Stand Up or Sit Down," a TBS special in conjunction with MySpace. The online comedy competition invites amateur or rising comics to submit video samples of their work through a MySpace profile. Users will vote for the top five finalists, who will then by invited to perform in a one-hour special filmed at The Comedy Festival to air the next night on TBS. Following the telecast, viewers will be invited to go to MySpace to vote for their favorite.

Also coming up for the busy comedian, The Hollywood Chamber of Commerce just announced that Lopez will serve as the Grand Marshal of this year's Hollywood Christmas Parade. He joins a grand tradition of entertainers such as Jimmy Stewart, Sammy Davis Jr., Bob Hope, Ron Howard and Arnold Schwarzenegger who have served as Grand Marshal of the Parade over the past 75 years.

The avid golfer, Lopez will host the 48th Bob Hope Chrysler Classic in addition to the World Golf Hall of Fame induction ceremony. The annual induction ceremony is a 60-minute television show to air on The Golf Channel on Thanksgiving Day.

Lopez is a two-time host of the Latin Grammy Awards and a co-host of the Emmy Awards. He was also a commentator for HBO's hit sports show "Inside the NFL" for the 2003-2004 football season. In August 2005, Time Magazine recognized Lopez as one of "The 25 Most Influential Hispanics In America" and he is also the recipient of numerous awards including the Image Vision Award for Excellence in Television and the National Hispanic Media Coalition Impact Award. In addition, his autobiography "Why You Crying?" was on the New York Times Bestseller list. He has appeared in such films as "The Adventures of Shark Boy & Lava Girl" and will soon be seen in the upcoming Universal Feature film "Balls of Fury." In 2005, George received a kidney transplant donated by his wife Ann. George and Ann Lopez are national spokespersons for the National Kidney Foundation. With his comedy albums, tours, TV show, book, movies, awards and influence, comedian George Lopez is El Mas Chingon.

Oglio Records is a well established independent label entering their 13th year in the music business. Oglio's growth has earned it a position on Inc. Magazine's 1998 listing of the 500 fastest growing companies in America. Oglio has an excellent reputation and is well known for producing unique comedy packages. Distribution in the USA and Canada is provided by Fontana (A Division of Universal Music). Oglio has the ability to market and sell their products to every retail outlet in North America. Oglio has the distribution reach of a major label with the attitude and focus of an independent label. With ambitious plans for new projects, Oglio is poised for continued growth and future success.