Walker Caine Returns for Another Round

Capt. Walker's disappearance after an accident-proned 2006 solo tour has left many fans and industry insiders guessing as to whether or not he would be returning to studio or stage. But Walker Caine has officially returned to the studio at MLA Records to begin serious work on an early 2007 release.

Artist Walker Caine has officially returned to the studios at MLA Records to begin work on an early 2007 release.

Capt. Walker's disappearance after an accident-prone 2006 solo tour has left many fans and industry insiders guessing as to whether or not he would be returning to studio or stage.

"I was rather wondering about that too," stated Walker with a smile. "I was taking some time to spend with the family and getting my back healed up and in shape after that disc fracture. Well, then this creative rush came along, grabbed my heart and made me set up a new studio so I could capture some of those wandering insights and motivations. Not to mention hearing from the fans... I know I have to keep going. The road just never ends."

These occasional stops at MLA Music are keeping the follow up to the 2005 ground-breaking release Soft Shoulder well underway; and, like always, the rock gods are popping in and out of Walkers life pushing him on to do something new and creative. Still, as was seen with Soft Shoulder, Walker doesn't stop to ask if it sounds commercial or not; but it doesn't seem to put off anyone:

"You should play here in Germany I think you like it...",

"...just get to Georgia, we'll open for you and give you a place to stay",

"...a great show all by yourself! We had never heard you before and really wanted to meet you ... you just have to come back to Tennessee really soon!",

"I get a kick out of most letters I get," he continued. "I'm often amazed at what they have to say. With Soft Shoulder I tried something new and different as my own personal project and expected everyone else to stash it away in the archive of 'what the hell was that?' People really responded though and there was scattered airplay around the world -- especially with Headlights on the Highway and our City of New Orleans rendition.

The entire ordeal has shown me my creative corner of the industry so this next CD is going to expand on that. Simple and strong but a little closer to my past vocal styles. I think most people have now come to expect me to be a bit eccentric and break the rules a little and give them something to think about.

Although lyrically I seem to keep jumping into social and political undertones, musically I'm delving into other avenues showing some respect to the likes of Tesla, Evanescence, and others. But true to my roots you're also going to hear some electric blues and Led Zeppelin-ish acoustic takes. I'm also considering a remake of 'In the Rain'; it's a great song and I don't feel that last recording did it nearly the justice it deserved. My fans are both Rock and Country, so that crossover style will definately remain an underlying motion."

Returning to help Walker Caine is drummer Greg "Gus L. DaBere," guitarist Horst Zaspel, and string prodigy Alyssa "Abby Normal." Stepping in for outtakes is bassist Ghetto of Slip Micky and drummer Patrick J. formerly of For Felix. Despite his commitment to a new album, Capt. Walker's other projects have also been keeping him busy producing and writing.

As for live performances, the 2007 tour is in the planning stages, and like so many others, Walker generally avoids playing Arizona. Nevertheless you might still catch him at community benefits and bike runs when invited, because some things are just, well, Walker Caine. 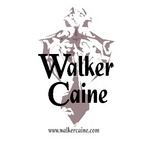