Called "the most anticipated independent artists of the year" by AllHipHop.com, T-Weaponz is poised to become the first transnational Hip-Hop group. The momentum of "Dem Boyz," a radio track with southern appeal and East Coast swagger, proves T-Weaponz's strength in the mainstream urban market, beyond its debut Spanglish hit "Mira Mira" featuring Pitbull and Notch, which saw over 15,000 radio spins nationally and 50,000+ digital download sales.

Released under Indie label Defiant Entertainment, which the group established itself, the Billboard debut and to sit among artists such as Beyonce and Snoop Dogg is a shining milestone on the path to success. Using the Internet to connect with fans around the world, and guerrilla marketing to conquer the streets, Defiant Entertainment has established T-Weaponz as a force to be reckoned with and is looking to release the group's debut full-length album in the first quarter of 2007 with major distribution.

In an industry where every possible frontier has been discovered and conquered (and exploited for that matter), emerge IzReal, Psalmz and Arkitek. Together, they are T-Weaponz and they are the last pioneers in an otherwise over-cloned Hip-Hop market. Out of the gutters of Brooklyn's East New York, their music is an expression of their upbringing. The group has developed all the qualities needed to be respected emcees and is on the verge of becoming the first transnational Hip-Hop group. In addition to lyrical ability, T-Weaponz combines English and the group's native Spanglish to create a distinct sound that is often imitated, but never equaled.

T-Weaponz appeared on New York City's hip-hop scene in the late '90s with its first self-released vinyl "City of The Gods." These uniquely creative songs inspired a following and were played regularly on several Internet radio shows. This exposure also led to T-Weaponz being asked to perform at various venues with the likes of DMX, the late Big Pun, Dead Prez, Wu-Tang Clan, Boot Camp, DJ Tony Touch, Jay-Z, Beenie Siegal and Mos Def. The group has worked with well-known artists in both the Spanish and English hip-hop scenes. These artists have recognized T-Weaponz's talent and realize that it is only a matter of time before the world acknowledges what they have already seen. 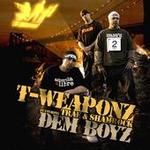