Ivan P. Dobranic of Sarasota, Fl., has been selected as an Honorary Member of Cambridge Who's Who for his exceptional art talent. While stricken with the debilitating disease of Muscular Dystrophy, Ivan finds determination and spirit through Art 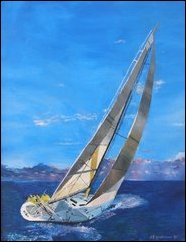 His art speaks for itself, inspiring, haunting and talented. Ivan faces many day to day obstacles from his battle with the disease of Muscular Dystrophy. This man has overcome so much, but the day to day medical expenses, special equipment not only for mobility, but also to continue creating his artwork can at times be overwhelming.

Cambridge Who's Who has a special request to all that read this press release; go to Ivan's website where he sells his art to support his overwhelming life & disability expenses. View the incredible talent he displays. "His art speaks for itself, inspiring, haunting and talented. Ivan faces many day to day obstacles from his battle with the disease of Muscular Dystrophy. This man has overcome so much, but the day to day medical expenses, special equipment not only for mobility, but also to continue creating his artwork can at times be overwhelming." His paintings are his livelihood, if you are as moved as I was by Ivan's story purchasing his art will be a great tribute to an incredible artist and human being.

Ivan Dobranic was born in Nice, France in 1960. He moved to Chicago a year later with his parents, at the age of 6, he was diagnosed with muscular dystrophy, and has spent most of his life in a wheelchair. He continued to develop his artistic talents and majored in art with three years at St. Xavier College. His first two one man exhibitions were at St. Xavier College and the Beverly Art center in 1987. His work was then shown on the muscular dystrophy telethon in 1988, 1989 and 1990.

In 1990 the family moved to Sarasota, Florida to better accommodate the progressive nature of his disease. He now requires a ventilator to breathe, and has only limited movement in two fingers of his left hand. Despite all this he continues to overcome every setback with his unfailing optimism and the caring support of his family.

His determination and creative spirit shine through his painstakingly crafted oil paintings and drawings. Dobranic as filled his life with paintings; he favors realistic landscape genre, and succeeds in imbuing them with a peaceful serenity. Each painting is characterized by rich color harmonies, sometimes somber and brooding, sometimes bright and cheerful. His work speaks of a focus of energy, a spirit that will not accept limits.

In Florida, Dobranic has exhibited in several one man and group art shows:

Dobranic was chosen in 1999 to represent Florida at the Art and Soul Festival in Los Angeles CA.

"Dobranic over comes disability to paint with a passion... His landscapes are expert, even haunting... His control in picture making is remarkable." Joan Altabe, art critic, Sarasota Herald Tribune.

'It was such a pleasure showing your beautiful work at my gallery.' Gale Fulton Ross, artist and gallery owner.

'Dobranic's paintings are remarkably beautiful in their own right, and incredible when seen in the context of his special strength.' Brent wall, Art Instructor at St. Xavier College.

'Jonny as his mother calls Dobranic, should be known as an inspiration to all who have the privilege of hearing his story. His artwork amazes me!' Cyndi Jeffus, Vice President of Business & Product Development, Cambridge Who's Who.

Dobranic Early Morning SnowIvan's lives with Muscular Dystrophy and Supports himself through artistry.