Kibo Books, LLC. an independent press in Brooklyn, NY, released three new books at a unique book launch event on Friday, June 8th, 2007 at BRIC Studio. The books featured were Potions and Plots Unraveled from my Locs and Conversations with my Violent Side from poets, Makeela B. Amani and Norman Alexander Alkamal Jemmott respectively, as well as, Small Black Book of Mighty Thoughts by writer Odimumba Kwamdela. In addition to the book releases, the event was punctuated by spirited performances by the featured authors reading from their newly released books, as well as readings upcoming poets Essence Lamonde (who also served as host) and newcomer Krysten Edmund. Food and beverage sponsorship was provided by bushbaby® coffee-house in Brooklyn. 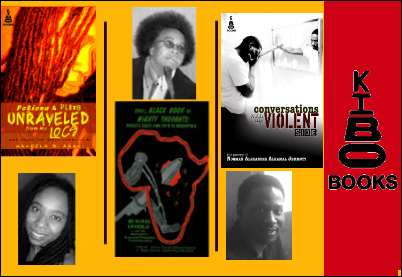 The books featured were Potions and Plots Unraveled from my Locs and Conversations with my Violent Side from poets, Makeela B. Amani and Norman Alexander Alkamal Jemmott respectively, as well as, Small Black Book of Mighty Thoughts by writer Odimumba Kwamdela. In addition to celebrating the book releases, the evening also included the official announcement of the recently restructured website, http://www.blakhandarts.com, from the independent artist-support company, Blakhand Artistik, Inc. --- a business entity founded by Ms. Amani.

The night began with a slide show reflecting the history of Kibo Books and Blakhand Artistik, Inc. and was punctuated by spirited performances by the featured authors reading from their newly released books, as well as readings upcoming poets Essence Lamonde (who also served as host) and newcomer Krysten Edmund.

During the evening Makeela B. Amani captivated the crowd with a rousing spoken word performance/reading from her book, Potions & Plots Unraveled from my Locs; she read several engrossing poems. House of Horrors, her signature piece about oppression and the African Diaspora moved the audience to participate energetically in a call-and-response manner. Another piece performed Composite of a King, an ode to the charm, appeal, and power of men garnered similar enthusiasm.

Makeela is a Brooklyn-based, Toronto, Canada born artist, whose parental roots sprout from the island of Barbados. She is an all-around artist who, in addition to writing and performing poetry and prose, also works in various mediums, including painting, web design, music arrangement, and sterling silver jewelry making. Makeela's art reflects the unconditional love, pain and joys of people of African descent in particular, and all folks in general. All these themes are also reflected in her first book, Journey Free: The Eighth House and previously released CD of poetry "KeyVisions: The Poetik Rantings of Makeela Amani".

Makeela has delivered her hard-hitting driving lyrical poetry in a variety of venues around the US, from coffee houses, schools and community centers to the New York International Independent Film and Video Festival at Madison Square Garden. Makeela has also been a motivational speaker at UCLA as part of the Choose College series, as well as, with the Youth2Leaders arm of the Tavis Smiley Foundation.

Norman Alexander Alkamal Jemmott, known simply as Alkamal, also wowed the audience, reading fresh works from his new book Conversations with my Violent Side (see left). Ghetto Get High referencing the trials of living in African American ghettos and Staying Poor, which reflects the economically challenged garnered thunderous applause from the eager audience. Alkamal also read his lament for victims of domestic abuse poem The Mirror Breaks from his first book titled, Recovery: the lost and found poetry of Alkamal Soul.

Alkamal is a poet, writer, spoken word artist and public speaker. In his works, as well as his performances, Alkamal employs a dynamic blend of imagery, thought and emotion. He is co-creator and developer of "the v3 sessions" and "The World of Words Youth Poetry Showcase." Both are programs geared to poets and musical artists of all ages to showcase their work.

Since 1996, he has traveled across the country performing spoken word at various cultural events as the Afrikan Liberation Day Celebration, The Black L.U.V. Festival, WordStock and the New York International Independent Film and Video Festival at Madison Square Garden. He's also been the invited guest speaker at numerous Black History Month celebrations, graduation and award ceremonies, as well as conferences hosted by the Tavis Smiley Foundation, The Urban Network, The College Board's NYOutreach Program and Madison Square Boys & Girls Club.

His upcoming projects include writing his first novel, "A Slow Turn Towards Tomorrow," a story detailing the African-American community's response to the victims of a gay-bashing incident. He is also in the development stages of establishing his communications development company, Dreaming Makes Sen$e® and is collaborating with friends on a health guide for adults.

The evening met its crescendo with the presence of author Odimumba Kwamdela, also known as the Grassroots Philosopher. Kwamdela possesses power-of -the-word ability that allows him on as consistent basis to write such interesting and poignantly detailed books.

In 1960 while in his early teens, and still known by his given name John A. Brathwaite he, who would some years later change his name to Odimumba Kwamdela, left his native Barbados for London, England. He eventually enlisted in the British Army and served in the Mideast; after military service, he left London for Ontario, Canada. There, he freelanced with Toronto newspapers before becoming founding publisher and editor of Spear, reputed to be the first Black magazine published in Canada.

To date, Kwamdela has published 14 books of fiction, nonfiction and poetry, and one musically dubbed poetry CD. A former New York City Board of Education high school teacher of Writing and Graphic Arts, Kwamdela taught adolescent offenders for several years in the roughest schools in the world, located in the "belly of the beast," infamous, volatile Rikers Island Jail. Kwamdela discussed his experiences in this school jail with audience members.

At the event Kwamdela touched on his latest tomes, and recalled his experiences in the NYC school system documented in his 2004 release Journey Through Jailhouse Jeopardy: A Good New York City Teacher Ends Up Down in Bad Rikers Island Jail, which is a no-holds-barred account of some the fundamental causes for schools spiraling downward out of control. Also discussed was Kwamdela's 2006 release, Mighty Sparrow: Calypso King of the World chronicling the impact of The Mighty Sparrow on the calypso arena and Mighty Sparrow's rise from poor boy in Trinidad to undisputed Calypso King of the World.

Finally, Kwamdela's latest book Small Black Book of Mighty Thoughts: Africa's Seeds Sure Path to Redemption, was unveiled in which the author presents his afro-centric philosophies with the realistic solutions to the unique problems faced by people of African ancestry.

The evening concluded with host Essence Lamonde bringing the three authors onto the stage to impart some final words. The three authors emphatically thanked their audience for their support and shared their visions for supporting other writers and artists through combined efforts. Ms. Amani talked of the method through which Blakhand Artistik, Inc. supports visual artists and poets with online publication; Mr. Jemmott discussed the manner through which Dreaming Makes Sen$e® will work to support clients with writing projects and other communications. Kwamdela capped the evening off by imparting his dream to continue his 30-year mission to provide an avenue through which emerging authors can smoothly transition from manuscript to finished, perfect-bound publications.

Alkamal JemmottAlkamal, also wowed the audience, reading fresh works from his new book Conversations with my Violent Side. - photo by Sherman Swaby

Makeela B. AmaniMakeela B. Amani captivated with a rousing spoken word performance/reading from her book, Potions & Plots Unraveled from my Locs. -photo by Sherman Swaby