This free event in northern California's north Monterey Bay area will have an hour and a half ceremony at midday to honor our nation's killed in action and others who died while serving. The Saturday, September 1, 2007, event from 9AM to 6PM will also have a military-vehicle show and swap meet. 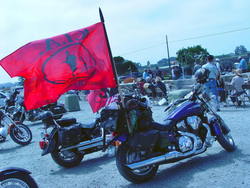 honored the event as our first keynote speaker

The USA KIA/DOW Family Foundation (USAKIA), in conjunction with J&S Surplus & Outdoor Store, a division of Eagle Emblems, and America Remembers KIA, will hold its Third Annual KIA Thunder Run, Military-Vehicle Show, and Swap Meet on Saturday, September 1. The Labor Day Weekend event in northern California's Monterey Bay Area will again be next to J&S Surplus & Outdoor Store. Major participants include Rolling Thunder and the American Legion Family. The event will be free and open to the public.

The store and site are located at the intersection of N. Struve Road and Highway 1 in Moss Landing. For 2007, the group plans food and merchandise sales, as well as music. Jim Gilbertson, a J&S Surplus & Outdoor owner, says, "Just look for the flags" to find the landmark surplus, paint-ball, and outdoor-supply store.

The event will take place on a Saturday on Labor Day Weekend for the third straight year, and the California Military Vehicle Collectors Association (MVCC) will put on a military-vehicle show for the second year in a row. Vendors will also put on a swap meet like last year besides, as well as sell food. There will be music all day and an hour and a half ceremony beginning at noon. For the third straight year, Ms. Gabby Cribland will sing the National Anthem, and for the second straight year, Big Rain will provide live music.

Keynote speaker for the Third Annual KIA Thunder Run will be Gold Star Mother Nadia McCaffrey. Her son, Sergeant Patrick Ryan McCaffrey, was KIA in Iraq in June of 2004. Patrick was a member of the California National Guard. She also founded the Sergeant Patrick Ryan McCaffrey Foundation in his honor to benefit fellow veterans. It has a project called Veterans Village at http://www.veteransvillage.org.

USAKIA plans a raffle to raise funds, and tax-deductible donations can also be made at the nonprofit's Website, http://www.usakia.org. Its activities include events, a free flag program, and a project for children of those who die in combat which the nonprofit began with a donation of tickets to Paramount's Great America from the PGA. It also plans other activities to benefit KIA and DOW families.

USAKIA opened two blogs in early 2006, Your Shield on Blogger at http://usakia.blogspot.com and USAKIA's Blog on Yahoo at http://blog.360.yahoo.com/usakiadowff . The not-for-profit corporation also began an eBay blog in late 2006, Fallen Heroes' Remembrance, at http://blogs.ebay.com/usakia , and a Newsvine column in April at http://usakia.newsvine.com .

2007 KIA Thunder Run, Military-Vehicle Show, and Swap Meet FlyerHere's the latest flyer for the event in PDF format. It includes a map.

Swap Meet at the Event in 20062006 was the first year with a military-vehicle show and swap meet.

Military JeepHere's another military vehicle on display in 2006.

Raised U.S. FlagThe midday ceremony had a flag-raising ceremony with the National Anthem. Here we see the U.S. flag raised.

USAKIA and Rolling Thunder PresidentsCalifornia chapter president of Rolling Thunder, Chaplain Joy Jeannette, receives a Certificate of Appreciation from USAKIA for their participation in 2006. Joy also spoke about a family member KIA in Vietnam.

Vendors at the 2005 EventThe first KIA Thunder Run was in 2005. Here we see some vendors.

Kids at Event in 2006The event has many families attend.