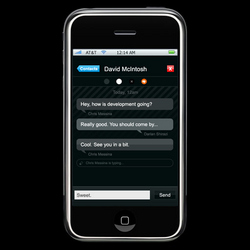 FlickIM, creator of the most popular iPhone chat client, announced today the next step in improvement through listening to user requests. Building on the success of its user-friendly and user-inspired product, FlickIM has headed the torrents of input by incorporating SMS messaging, email notifications, and custom, user-generated skin options.

Since FlickIM's release last month, the chat client has generated a devout following of nearly 20,000 active users, many of whom have devoted tremendous amounts of time to provide feedback and suggestions to further improve and expand the user experience. FlickIM saw an opportunity to embrace this support and creativity by featuring their personalized skin creations on the homepage for others to enjoy. Now a user favorite, the company is further encouraging this creativity by launching a prize-backed search for the most popular user-generated skin, aptly titled "Show Us Some Skin". Top picks will receive anything from iPhone Bluetooth headsets to Apple gift cards, and all well-received submissions will be offered for anyone to use.

FlickIM's latest two user feedback-driven features, SMS and email notifications, offer a set of novel options to those who wish to remain informed of incoming messages even if they have navigated away from the FlickIM chat window, or have turned off their iPhones. In response to the iPhone's inability to provide an audible alert to web browser-based activity, FlickIM developed an SMS messaging system which notifies the iPhone user via text message that an incoming instant message has been received. Email notification provides the same alert service with the incoming message being recorded and delivered to a specified email address, allowing the user to manage incoming messages while operating other functions on their phone without diversion.

About FlickIM
FlickIM was created in 4 days by a team of young entrepreneurs in Berkeley, California. The service was launched on July 15, 2007 to enable iPhone users the ability to chat via AIM because of the iPhone's decision not to include an integrated chat app. Built for the iPhone and the Edge Network from the ground up, FlickIM has developed additional unique features. Such features include the ability to share YouTube clips and Apple movie trailers, message queuing when users are offline, and an automatic reconnection service which instantly logs in the user once the phone is unlocked or the user navigates back to FlickIM.

FlickIM was specifically designed to ensure a functional AIM chat app that is both easy to use and ultra fast (even on AT&T's Edge Network). Although the iPhone doesn't support integrated applications, FlickIM is still able to provide a feature rich web application that rival's Apple's iChat (based on user feedback on the FlickIM blog and at FlickIM support). To learn more about FlickIM, visit us at FlickIM or our Blog