Elvis's Tooth Reappears on eBay - A Crown Without A King 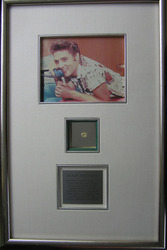 Among the oddities and rare collectibles of hair icon, Jesse Briggs, this one takes the cake, or peanut butter and banana sandwich, in this case. That's right; Elvis's tooth is resurfacing on eBay. To mark the 51st anniversary of Elvis's debut appearance on the Ed Sullivan Show, Elvis's tooth made its final appearance on EBay Sunday, September 9th.

Self-made millionaire, Jesse Briggs, grew up from humble beginnings. So, when he made it rich and famous, founding the world famous Yellow Strawberry Global Salons, he decided to go big; purchasing such items as locks of hair from John Lennon, Paul McCartney, Abraham Lincoln, Marilyn Monroe, and John F. Kennedy, as well as Elvis's tooth.

Now, over 30 years later, Jesse is retiring to his ocean front house in Puerto Rico, known as "Casa del Mar". With this retirement, comes many changes, including selling the majority of his rock 'n roll museum.

Elvis's tooth is the main attraction to the Yellow Strawberry Museum Store, set up on eBay. Other items include: John Lennon Lithographs, celebrity/historical hair locks, among other odd and rare collectibles. Bidding for Elvis's tooth will start at $10,000 and will be up on eBay for seven days, starting on Sunday, September 9th.