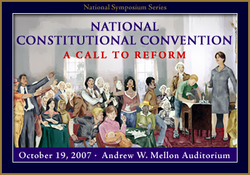 Should there be another Constitutional Convention?

This groundbreaking examination of America's governing document is free and open to the public, with advance registration required at http://www.amoreperfectconstitution.com. Members of the media are invited to attend, and should register on line and then contact Matt Smyth at the Center for Politics (434-243-8466). Wireless internet will be available inside the auditorium; electrical outlets will be available at specified locations. Please see special press policy for Justice Alito below.

The convention, which will include three panel discussions in addition to the keynote address and special remarks, will offer a wide range of topics for discussion such as presidential and congressional election reform, checking the powers of government and the question, "Should there be another Constitutional Convention?" All in attendance will have the opportunity to vote on each panel topic and render a tentative decision on the major reforms giving this event the feel of a constitutional convention.

The goal of the National Constitutional Convention is not to promote one possible reform over another, but rather to spur a grand, national discussion on the Constitution of the United States and whether the cornerstone of our republic could or should be a means of revitalizing civic and political engagement in America, curtailing apathy and renewing confidence in American politics and government.

Center for Politics founder and director Professor Larry J. Sabato added, "We're asking all Americans to set aside their own political loyalties, to look past the current 'values' debates and hot-button issues and to consider this very real possibility: that the failure of the nation to update the Constitution and the structure of government it originally bequeathed to us is at the root of our current political dysfunction."

In his new book, A More Perfect Constitution, Sabato provides twenty-three suggestions to update and improve the U.S. Constitution for future generations. The idea behind the book is to spark a national discussion of constitutional reform and generate a renewed public interest in the mechanisms of American government. By no means are the proposals contained in the book intended to be the end of the debate - rather the beginning of a generation-long look at a practical revision of a governing document that the Framers themselves intended to be updated on a regular basis. The National Constitutional Convention has been convened as a first step in this process. For more information and to join the discussion, visit http://www.amoreperfectconstitution.com.

SPECIAL PRESS POLICY FOR JUSTICE SAMUEL ALITO: According to stipulations from the office of Justice Alito, no audio or video recording will be permitted during his keynote address. Still photographs are permitted, and members of the media covering the event may take notes during his speech.