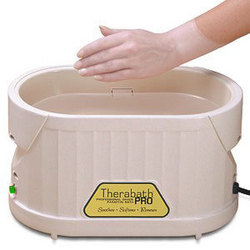 the paraffin did not yield an increase in bacterial counts after the contaminated hands were dipped.

R-Tech Laboratories, , Arden Hills, MN completed a lab study in September 2007 that provides additional proof that communal paraffin treatments are sanitary. In the R-Tech study, a person's hands were inoculated with a cocktail of bacteria including Staphylococcus aureus and Escherichia coli, and then dipped into melted 130 degree F paraffin. Samples were taken before and after dipping and then analyzed. Results showed that "the paraffin did not yield an increase in bacterial counts after the contaminated hands were dipped."

A secondary worst-case-scenario test was also performed where paraffin on the inoculated hand was put back in the paraffin bath. Several samples of the paraffin were taken and analyzed. Results showed that even during a worst case scenario where solidified paraffin was reused, "the paraffin did not yield an increase in bacterial counts after the contaminated used paraffin was placed back into the new baths for any of the time points tested." Manufacturer's suggest not reusing paraffin, but know that it does sometimes happen.

These results support previous studies suggesting that communal use paraffin baths are safe and sanitary. Please visit Therabath Paraffin Products website for all information including the R-Tech lab study and previous studies.

Therabath has been providing professional quality paraffin baths, refill paraffin and accessories since 1962. The Lifetime Guaranteed Therabath®PRO® professional unit is the industry standard for quality and is manufactured in Stillwater, MN under ISO 9001:2000 and ISO 13485:2003 standards.
###