Four years ago FenderSplendor shocked the paint meter industry when they began discounting paint meters. Over 4,000 Car Dealers have purchased FenderSplendor Paint Meters as competitors scrambled to bring a more affordable paint gauge to the market. FenderSplendor raised the bar again when the introduced the new 2008 FS 488 with an illuminated display in October. 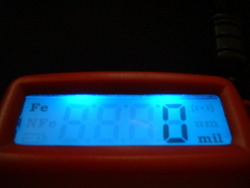 We are also putting together distribution agreements in Europe, The Mid East and South America for the 2008 FS 488 Paint Meter. These Countries have been held hostage by the high-price manufacturers for years, and now they are going to see the light.

As competitors scrambled to catch up, FenderSplendor "dropped a bomb" on the paint gauge industry with their new 2008 FS 488 Paint Meter with an Ice Blue Illuminated Display. After selling over 4,000 Paint Meters, President Allen Willey said "it's time for Car Dealers and Auto Auctions to see the light...when they use a paint meter."

" I saw the need for an affordable paint meter years ago, when car dealers were paying a fortune for basic paint thickness gauges. Being a Car Dealer myself, I realized that Automobile Dealers would all buy a paint meter if they could afford it. We immediately began discounting paint meters and selling them directly on our website at WholesalePaintMeters. Within a few short months FenderSplendor became the fastet selling Paint Meter in history."

President Allen Willey went on to say; "I also saw a huge problem with all the paint meters on the market, including our own record breaking FS 488. The simple fact is that close to half the vehicle appraisals and purchases are done at night. A paint meter without an illuminated face is almost useless in these situations."

FenderSplendor began research and testing on an illuminated display over 2 years ago and released the new 2008 FS 488 with an Ice Blue Illuminated Display on October 1, 2007. As competitors were scrambling to bring an affordable gauge to market FenderSplendor announced the new FS 488. Available at Illuminated Paint Meter the 2008 shattered every known record, selling over 210 Illuminated FS 488s in the very first month.

When asked about the future, President Willey added; "We have 2 key targets. We are going to drive down the price of paint meters (coating thickness gauges or mil gauges) used in the Powder Coating Industry and in fabrication and testing. Our new FS 502 Coating Thickness Gauge offers more features for close to half the price of existing gauges." The FS 502 is available only at Affordable Mil Gauge

"We are also putting together distribution agreements in Europe, The Mid East and South America for the 2008 FS 488 Paint Meter. These Countries have been held hostage by the high-price manufacturers for years, and now they are going to see the light."

FS 488 and BlackBook. Less than 4" tallSmall..easy to use...and lighted for night time readings