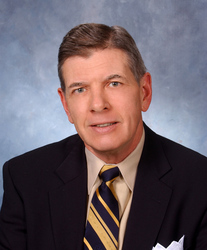 Welsh arrived in Kissimmee in 1982 after a three-year stint as lead electrical engineer at East Kentucky Power Cooperative in Winchester, Ky. Kissimmee's electric utility at that time had 85 employees and 18,000 customers.

Today, the utility employs 300 employees who serve more than 63,000 customers. In addition to his leadership at KUA, Welsh currently serves as chairman of the Florida Municipal Power Agency and executive committee member for the Florida Reliability Coordinating Council.

Welsh previously served on the boards of the American Public Power Association in Washington, DC and the Florida Municipal Electric Association in Tallahassee.

One highlight of his career was being selected as a torchbearer in 1996 to carry the Olympic flame on its way to the summer games in Atlanta.

Welsh holds a Master of Business Administration degree from the Crummer Graduate School of Business at Rollins College and engineering degrees from the University of Pennsylvania. He holds membership in the Institute of Electrical and Electronics Engineers, Inc. (IEEE).

Welsh will be honored by the KUA board of directors at its regular meeting at 3:30 p.m. on Dec. 5.