The Z Truck is Here - Los Angeles Finally has a Healthy Snack Truck for Kids and This is No Ordinary Snack Truck! It's the Popcorn Party Truck! 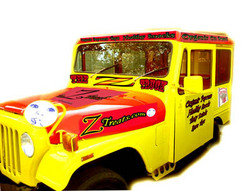 The rain has finally stopped pouring and there's more than just sunshine brightening the faces of every parent in Los Angeles today. The Z Truck, the one and only healthy snack truck for kids has just hit the streets. The Z Truck carries the best gourmet popcorn on California as well as other healthy fun snacks for the kids and parents alike. It also carries helium balloons If that's not enough, the truck is a bubble blowing interactive toy on wheels.

Jill Gatsby, owner of a new company called Z Treats that makes some of the best gourmet popcorn in California says that the Z Truck is her answer to the ice cream man. "I was sick and tired of seeing my kid flip out at the park every time the rusty old ice cream truck pulled up. The guy circles the park twenty times a day and he won't stop playing the music. My friends and I aren't so keen on feeding our kids huge doses of sugar, nor were we happy at the site of a three year old girl walking away from the ice cream truck with a pack of candy cigarettes in her hand. That was the straw that broke the camel's back for me. I decided to create a healthy snack truck for kids that was super clean, super fun with delicious all natural treats on board. We have sweetened and unsweetened popcorn, but even one big bag of our sweetened popcorn has less sugar than a glass of Kool-aid! I do confess though that some chocolate has slipped onto the Z! But the Italians say that chocolate is good for your heart and I must agree!"

The Z Truck is a 1982 US mail truck that Jill Gatsby converted into a kids dream come true. The old mail seat has been replaced with a red Nascar racing seat and the truck has been painted Corvette red and yellow inside and out. Even the shelves inside the truck are Corvette red. On the curb side of the vehicle a three foot long horn has been installed so children can come up and honk it. Jill Gatsby spared no expense creating the Z Truck. It comes loaded with its own PA system with over twenty five animal sounds, fifty children songs and five different sirens. Oh, and let's not forget the state of the art vintage popcorn machine.

The Popcorn PartyTruck even works the graveyard shift! That's right. This cute little truck is also bringing its services to the nightclub scene all over Los Angeles. Starting out on the Sunset Strip this little vehicle makes it way across West hollywood all the way to downtown Los Angeles to the loft scene. Keep your eye out for the Z Truck out at the county line on the weekends where they party it up with all the bikers and Jay Leno!