Pop Art Creations will announce their new political toy one day before Super Tuesday: Hillary-in-the-Box, another Hillary-themed toy on the market this election season. We've all been inundated with Hillary toys of the not-so-flattering variety, since Clinton announced her candidacy for President. Hillary-in-the-box just may be the very first positive (or pro-Hillary) toy available this year. 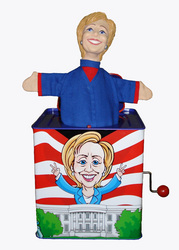 Due to my budget restraints, I had to choose just one candidate and take the risk. With the potential to become our country's first woman President, Hillary stood out to me right off the bat. It was a gut feeling.

Political toys are popping up all over the country this election season, with some companies seeing sales in the millions of dollars. Inspired by these reports, one small business owner is launching a new political toy that literally pops up.

It's Hillary-in-the-Box: the brainchild of artist Heather Courtney, owner of Pop Art Creations in San Jose, California. It is a classic jack-in-the-box toy that plays "Hail to the Chief", with a smiling Hillary Clinton inside. The sides of the box show caricatures of Clinton in various important roles of American history. The artwork is appropriate since the motto on the top reads, "We're Making History". Courtney believes the motto to be as relevant to her company as it is to the 2008 Presidential Race.

When asked why she chose Hillary Clinton for the product, Courtney says, "Due to my budget restraints, I had to choose just one candidate and take the risk. With the potential to become our country's first woman President, Hillary stood out to me right off the bat. It was a gut feeling." Courtney further explained that with so many anti-Hillary toys out right now, she felt it important to make something positive and celebrate the most exciting, and certainly historic, election we've ever seen in this country.

Hillary-in-the-Box is being manufactured in a small limited edition, to start, and is in production now. Courtney estimates the company will start shipping the toys in March, but is taking pre-orders exclusively through their website now. The toy retails for $29.95.

Pop Art Creations was founded in 2003. Heather Courtney creates handmade, wooden jack-in-the-boxes that feature the likenesses of her customers, which she sculpts by hand. Her business hit a new level in 2006, when Ellen Degeneres featured Pop Art Creations, and her own Ellen-in-the-box, on her talk show. The work is all done by Courtney and each is one-of-a-kind. The Clinton jack-in-the-box is the first mass-produced product for the small company.

Hillary speaks in San Jose California and we were there!