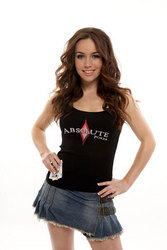 It's very friendly for young ladies such as myself. The software is really quick, simple to use and attractive as well.

What does poker have in common with astrophysics? At first glace, not a whole lot. But that hasn't stopped popular online poker site AbsolutePoker.com from bringing a 23-year-old astrophysics graduate on board to represent the site in the UK market.

To be fair, Liv Boeree is no stranger to the poker world. Since August 2005, the London-based model has worked as a TV presenter, writer and interviewer on some of the most popular poker broadcasts including Ultimatepoker.com Showdown, Gutshot TV, Daily Express, Challenge TV, Gala UK Poker Tour, Sky Poker TV, Poker Verdict, Ladies' World Poker Open, and the WSOPE.

But Liv Boeree's poker resume isn't just about smiling for the camera. In a little over two years, she has amassed more than 11 top-10 finishes in Texas Hold'em tournaments across London including four first place wins. In the past two months, Live Boeree has won seats in two major tournaments including the Five Diamond Classic WPT in Vegas and Grosvenor UK Poker Tour Brighton. Most recently, she came 7th in the Welsh Amateur Championships.

Boeree began her poker career on the television series "UltimatePoker.com; Showdown" in August 2005. There, she learned some valuable tips from Annie Duke, one of the poker world's best female players. It was on "UltimatePoker.com Showdown" that Liv also earned the respect of world-renowned poker sensation Phil Hellmuth. After watching the 23-year-old in action at the tables over the past two years, the 11-time WSOP bracelet winner has become so impressed that he invited Liv to attend his exclusive holiday bash at the Palms, solidifying her place in the poker world as a respected player.

"Absolute Poker is the perfect fit because it's such a fun, young and vibrant brand," stated Boeree. "It's very friendly for young ladies such as myself. The software is really quick, simple to use and attractive as well."