JP Software Releases Take Command 9 - Our Biggest Upgrade Ever - At a Special Introductory Price of $79.95

JP Software has integrated all three of its award winning console and command line products into a single package in its biggest upgrade ever - Take Command 9. TC9 merges an easy to use graphical file management environment with the power of the command line. We have also added hundreds of enhancements to our scripting language including 7 real-time monitoring commands to watch over activities in your computer and trigger actions. 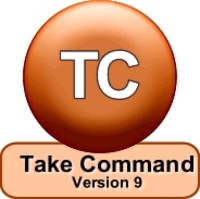 JP Software is proud to announce the latest release of our award winning Windows console replacement and scripting language for batch processing - Take Command 9. We have rolled all three of our products, Take Command, 4NT and TCI into a single integrated environment with lots of new features.

We have added seven new commands that allow you to monitor activities on your computer including start/stop processes, changes in folders and files, changes to the event log, USB and Firewire device insertion and removal. You also have the ability to start and stop Windows services. And as usual, we have listened to your feature requests and added hundreds of new enhancements to our existing command, functions and variables.

The combination of these three elements creates an enormously powerful environment for real-time and batch processing activities. You will get real time savings in developing and deploying batch processes and in managing your Windows computers.