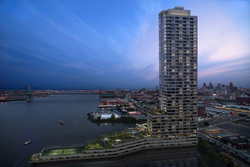 it has been a long and challenging road

The riparian rights granted Friday, which were first introduced in the state house by O'Brien, are the first granted since the governor called a moratorium on their issuance in April 2006.

Eli Verschleiser a founding partner at Multi Capital Group, a Real Estate Investment Banking Firm in New York City confirmed that Trump Tower Philadelphia will now move forward, "it has been a long and challenging road," he stated. The project will now break ground. Multi Capital Group is an equity partner in the transaction.

The state had been issuing 99-year riparian rights leases for $1. But with casinos in the works, there was suddenly a lot more interest in development along the Delaware, and many felt the state should get more for the rights.

This past June, the Department of General Services recommended that developers pay a one-time fee of $5 per square foot of land for a 99-year lease, and that each lease include public access to the waterfront. But the legislators added additional fees: In addition to $5 per square foot of riparian land, the developers will pay one dollar per square foot of their buildings. Half of that money will accompany the $5-per-riparian-foot fee to state coffers. The other half will go to the city's Commerce Department, to be used for the implementation of the Central Delaware Riverfront Plan put together after a year of public input. Exactly how that money will be spent is uncertain, O'Brien said. He, Fumo and Keller will soon request a meeting with the Commerce Department to establish guidelines, he said.

Specific information on the development can be found at http://www.TrumpTowerPA.com.

The Trump Organization (http://www.Trump.com) is the primary company of Donald J. Trump, the most prominent American real estate developer. Donald J. Trump is the current CEO of the company. The company oversees nearly all of the business development interests of Donald Trump, such as real estate, hotels, golf clubs, etc. Trump is also the Chairman of the Board of Trump Entertainment Resorts. His three oldest children, Donald, Jr., Ivanka, and Eric, are currently executive vice presidents within the organization.

Multi Capital Group (http://www.Multi-Capital.com) is a national Real Estate Investment Banking firm prominent in debt and equity placement, investment sales, and commercial and residential loan sales. Its clients include some of the most active developers and institutions both nationally and in the New York metropolitan area.