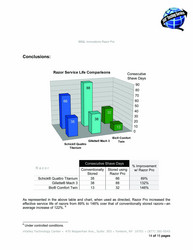 They say necessity is the mother of invention, and that certainly was the case

A consumer's cost for a clean shave has jumped dramatically as steel prices have increased more than 60% over the past three years. Retailers are even feeling the pinch, experiencing a rapid upsurge of shoppers nicking expensive razor blades and cartridges. It is so bad that Gillette® has announced a task force to help retailers prevent inventory shrinkage. In response, BB&L Innovations, LLC has brought to market the RazorPro®, a device proven to significantly extend the life of individual blades and cartridges.

The science behind RazorPro reveals that razors dull not from use, rather from the moisture that remains on the blade; tiny water droplets that remain between each use corrode and chip the blades. The innovative design of RazorPro provides a cup and platform that fits all major brands of razorblades with a device that automatically and thoroughly dries the blades after each use.

Independent lab test results by 360 Degrees Testing Lab prove that individual blade cartridges lasted between 31 to 50 days longer when stored in the RazorPro. Depending on the texture of a person's beard and skin, the lab report states, "When used as directed, RazorPro increased the effective service life of razors over that of conventionally stored razors."

With the average cost of replacement cartridges reaching nearly $32.00 per package of eight cartridges, consumers who change blades once per week can expect to shave $95 to $200 off their budgets if they use the RazorPro.

"They say necessity is the mother of invention, and that certainly was the case," said Brian Cohn, president of BB&L Innovations. "One day we were all griping about how expensive shaving had become, so we set our minds to finding a way to cut the cost, and thus the RazorPro was born."

RazorPro can be purchased directly from the manufacturer's website for $19.95 at http://www.razorpro.net or on QVC.com. It is available in three designer colors: Pearl, Granite and Onyx. The announcement of additional retail channels is expected by the third quarter of 2008.

Lab photo comparison of two Bic Twin razors, one stored in the RazorPro (top) and the other stored conventionally (bottom). After 13 days, the one stored in RazorPro is still sharp, whereas the other is significantly corroded and chipped.Comparison Lab photo 1