After a film adaptation of Salinger's 'The Catcher in the Rye,' writer, artist and director Nigel Tomm publishes the longest sentence which contains the longest word. The 2.4 million words sentence is published in four volumes of Nigel Tomm's novel 'The Blah Story' (i.e., volumes 16, 17, 18 and 19). The sentence ends up with a 3,609,750-letter word which contains all previously known longest words. 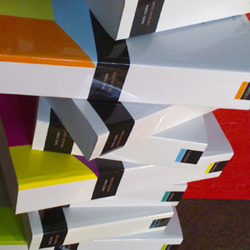 Conceptual film adaptation of 'The Catcher in the Rye,' directed by Nigel Tomm serves us 75 minutes of pure blue screen, nothing more, nothing less.

After film adaptations of J.D. Salinger's 'The Catcher in the Rye' and S. Beckett's 'Waiting for Godot,' writer/artist/director Nigel Tomm publishes the longest sentence in literature which contains the longest published word. The sentence is contained in four volumes of Nigel Tomm's novel 'The Blah Story,' i.e., the sentence occupies volumes 16, 17, 18 and 19, while 'The Blah Story, Volume 19' is almost entirely occupied by one word which contains all previously known longest words (except chemical names).

The word contains all previously know longest words the longest of which are: lopado...pterygon (183 letters; it is a fictional dish mentioned in Aristophanes' comedy 'Assemblywomen'), Bababa...nuk (101 letters; coined by J. Joyce in 'Finnegans Wake'), Taumatawha...tanatahu (85 letters; it is a place name), pneumo...iosis (45 letters; it is a lung disease, this is also longest word in a major dictionary), antidisestablishmentarianism and others.

The 3.6M-letter word is coined by adding different words which end up and begin with the same letter, i.e., the first 34 letters somewhenotodayoundressomecological are coined from words somewhen+(n)ot+(t)oday+(y)ou+(u)ndress+(s)ome+(e)cological.

Traditionally, the longest sentence in English literature has been found in James Joyce's 'Ulysses' which contains 4,391 words. However this was surpassed in 2001 by Jonathan Coe's book 'The Rotter's Club' which contains a sentence 13,955 words long. There is also a Polish novel 'Gates of Paradise' written by Jerzy Andrzejewski, and published in 1960, with about 40,000 word sentence. Also, there is a Czech novel that consists of one long sentence (128 pages long) 'Dancing Lessons for the Advanced in Age' by Bohumil Hrabal.

In 'The Blah Story' Nigel Tomm not only develops abstract literature or algorithmic literature genres, but also introduces literary phase-shifting, i.e., allowing nearly identical phrases at slightly differing lengths to repeat and slowly go out of phase with each other. Nigel Tomm's literary phase-shifting minimalism is made dazzlingly entertaining in 'The Blah Story,' which is made persuasively engaging textures from repeated phrases in the novel. All 'The Blah Story' is based mostly in steady pulse, stasis and slow transformation, and often reiteration of phrases or other textual units such as paragraphs, sentences, and words (with over usage of the word 'blah').