Introducing the Cohiba 35th Anniversary Humidor number 422 out of the 500 that were produced in 2002 by Habanos S.A. 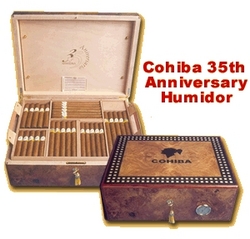 I have seen a lot of wonderful humidors come from Habanos, but the detailed work on the Cohiba 35th Anniversario simply takes the cake!

The Cohiba brand is not only the king of Cuban cigars, but cigars all over the world. To celebrate the 35th anniversary of this legendary Cuban cigar brand, Habanos S.A (Cuba) released only 500 special edition humidors way back in 2002. The Vancouver Cigar Company would like to announce that they have the last Cohiba 35th Anniversario Humidor (# 422/500) available for retail in North America, and possibly, the world.

The Cohiba brand started production in 1966 and is likely the most renowned tobacco product on the planet. That distinction was earned, among other reasons, by being the gift of Cuban leaders to other world leaders in Cuba and abroad.

All 135 Cohiba cigars that come in this humidor have been aging for over 6 years. "This is definitely a masterpiece released by Habanos S.A. Since its a dedication to the Cohiba brand, it makes the complete package ever so valuable," says Trevor Wallace of the Vancouver Cigar Company.

The vitolas (Size of cigars), are all dressed to impress with a special cigar band solely created for this 35th anniversary, edition. Included are 35 Cohiba Lanceros, 20 Cohiba Espléndidos, 20 Cohiba Robustos, 20 Siglo V and two unqiue Cohiba sizes (20 Gran Corona) and (20 Piramides) that have only been included in this edition and will never be mass produced again.

The humidor itself is a thing of beauty. With its handmade cedar construction, bird's-eye maple finish, and a hand-crafted inlay presenting the Cohiba brand logo on top, this truly makes the 35th Anniversario one of the most beautiful humidors ever made.

"I have seen a lot of wonderful humidors come from Habanos, but the detailed work on the Cohiba 35th Anniversario simply takes the cake!" explains Mr. Wallace.