Incredible developments in small-wind turbine technologies have spawn a number of new turbine designs focused on the under 1 kW segment of the market. Vertical axis wind turbines and squirrel cage designs dominated the small wind category. A new turbine category has emerged targeted at the commercial and industrial sectors. This new category is best referred to as "middle-wind" with power ranges between 50 kW and 500 kW. We'll soon see middle-wind turbines on commercial and residential buildings wherever the wind blows. 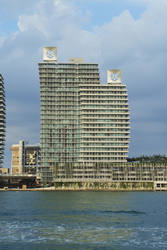 we care and we're green

The Wind Power Show in Houston (June 1-4) was certainly worth the visit. Over 950 companies with interests in every aspect of wind power exhibited and over 13,000 people attended. The exhibition was so large that it took 15 minutes to walk from one end to another -- without stopping. The traffic level was very encouraging for the industry.

Utility-grade wind power has taken off with a strong tail wind. In its wake is the rapidly developing small-wind sector. The incredible advances in small-wind turbine technology are quite profound. In just the last year a number of new companies have appeared on the scene which has attracted seed funding and fostered the development of a new industry. The small-wind industry is still in its infancy yet over 30 exhibitors displayed small wind turbines. KR Group and IR Wind Power both had impressive booths and displayed numerous iterations of their vertical squirrel cage turbines. The overall small-wind turbine sector ranged from 100-500W Savonius and Darrieus types to 6kW horizontal turbines. The only thing missing was "applications". With few exceptions, most turbine exhibitors focused on their products and not on their best use.

Look around your neighborhood and perhaps you have noticed small-wind turbines popping up on chain-owned buildings, commercial buildings, residential homes and apartments. These turbines shout out the message "we care and we're green" but usually have only a minor impact on power bills. That is about to change with the introduction of a new class of wind turbines.

Middle-Wind Market
Today a number of companies are developing "industrial-grade" turbines that will target markets where there is both sufficient wind and high energy costs. These turbines stretch the definition of "small-wind turbine" and are rated between 50kW to over 500kW in reasonable winds. They are better referred to as "middle-wind" turbines (50-500 kW). Two such designs are from GreenEnergy and TMA. Both have developed middle-wind turbines that are housed in structures that protect them and the surrounding environment while capturing and directing additional wind currents into their rotor blades. Both designs feature the ability to capture large quantities of available wind while making support a breeze - both feature walk-in maintenance.

GreenEnergy (http://www.GetSmartEnergy.com) has developed a 5-bladed industrial-grade turbine called the WindCube that funnels air into its turbine much like a jet engine funnels and compresses air at its entrance. Designed for tall commercial buildings the WindCube is rated at 55kW at 12 m/s and employs an electromechanical yaw mechanism that provides 360 degrees of rotation. The turbine automatically cuts out at wind speeds in excess of 40 mph.

TMA (http://www.TMAWind.com) has developed an entirely different solution - a family of vertical axis wind turbines housed in their own "building". The structure acts to house the turbine and, like the WindCube, captures additional wind through its uniquely designed structure. TMA offers wind turbines rated from 1kW to 525kW. Most models utilize a Savonius-style two-blade air foil rotor and three wind deflectors to achieve maximum power in the smallest structure. TMA's wind turbines are designed for rural, high wind areas to provide power to commercial structures and small communities.

Both of these solutions have the advantage of a well defined market strategy and a solution that is designed specifically for their intended applications.

Bad Weather
Another unique application area with large potential is harsh environments that require ruggedized and weatherproof solutions for very high wind applications - places where most wind turbines typically fear to tread. One solution that addresses this market is from Proven Technologies (http://www.ProvenEnergy.com), a Scotland company that produces a 3-blade wind turbine with hinged, carbon fiber blades that reportedly allow the turbine to continue operating at full power in 100 mph winds. Proven Technologies manufactures turbines rated at 2.5, 6 and 15 kW. Proven has reportedly installed over 1,500 turbines throughout the UK.

Lack of Applications
Except for the rural-residential markets carved out by Bergey et al, small-wind turbines have yet to become synonymous with a specific industrial application, such as Xerox established for copy machines. There is clearly plenty of interest from a broad range of prospects but with rare exception, visitors at the show saw only turbines, not solutions.

Eventually, successful companies will develop application-specific turbines that are virtually plug-and-play for their intended application (use), easily installed, and competitively priced with utility power. Examples might include squirrel cage turbines designed for standard industrial exhaust ducts that can be installed by a local electrician, or VAWTs coupled with solar and battery backup optimized for the nation's 15,000 remote telecommunications towers.

What's still missing however is marketing and market development. Some of these markets are discussed in the white paper Big Opportunities for the Small Wind Industry (http://www.gogreenenergyllc.com/bigoppwp.pdf). When turbine developers start targeting and designing for specific niche applications we'll quickly see the curious become customers, and the rapid development of small-wind and middle-wind markets.