Recently, chiropractic's largest marketing super conference took place where hundreds of the most successful doctors of chiropractic met to learn more unique marketing strategies from Ben Altadonna and his special guests, including the legendary Robin Leach. 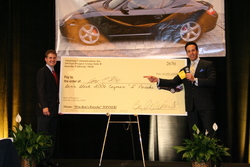 Lifestyles of The Rich And Famous.

Ben Altadonna, one of the nation's cleverest marketing strategists began using his talent as a practicing doctor of chiropractic. Prior to that, he struggled, living in his chiropractic office and barely surviving.

Now he is the owner of 3 successful companies and charges no less
than $10,000 for one-on-one consulting.

"I love business and love showing all types of business owners and entrepreneurs how to make more in 12 months than they've made in the last 12 years," says Altadonna.

Ben was featured in "The Phenonmenon," a made for T.V. infomercial that targeted small businesses (http://www.ben.in12months.com) and is featured in many marketing books written by the one and only, Mr. Dan Kennedy.

Recently, Ben hosted two events in three days. The first entitled, "Marketing To The Affluent," featured Robin Leach, famous for helping making "Entertainment Tonight" a success and for his own creation, "Lifestyles of The Rich And Famous."

The second event that took up two out of the three days was an opportunity for doctors of chiropractic to learn how to attract up to 30-50 patient referrals each and every month with virtually no advertising. Over 400 people attended this event and spent up to $1,800 each.

One of the attendees, Dr. Keith Currie from Greenbrier Arkansas went home the winner of the "Win Ben's Porsche" contest. "I am so proud of Keith... he deserved to win my car. His acceptance speech was very moving."

For information on how to purchase the audio of this three-day event, pre-loaded onto an Apple iPod, call 925-743-3779 otherwise go to: http://www.BenAltadonna.com.