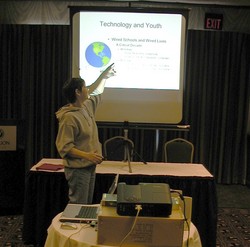 Too many people have labeled video games as a negative influence, but as a member of the gaming community and teacher, I have seen video games used to teach as they entertain.

According to a study conducted by the Federation of American Scientists, 45 million homes have video-game consoles. Experts with the National Education Association, along with software companies, see the use of gaming devices as beneficial in the classroom, not just home entertainment. Parents and teachers have long viewed video games as a corrupting force rather than an educational tool, but, as a new generation of parents see the educational benefits of video games, educational gaming is becoming a trend.

Jayel Gibson, author, educator and video game advocate, supports the use of video games as an educational tool to spark creativity in kids of all ages. An adjunct professor at Southwestern Oregon Community College, and a popular fantasy author, she often discusses gaming in the classroom and using video games for creative purposes. Gibson's years spent gaming served as an inspiration for her novels, including her newest book "Quondam" (Synergy Books, May 2008, ISBN 978-1-933538-83-9, $14.95).

"Gaming has enormous potential as a teaching tool," says Gibson, an elementary school teacher for over 15 years with two Teacher of the Year awards for her use of technology in the classroom. "Too many people have labeled video games as a negative influence, but as a member of the gaming community and teacher, I have seen video games used to teach as they entertain."

Gibson says learning does not just come from the video games designed specifically for education, some of the most effective teaching video-game genres are management, role-playing and strategy. These types of games offer opportunities to develop new learning strategies, problem solving and real-life skills with built-in skill leveling.

Aware of the ongoing debate concerning video games and education, Gibson incorporates her own gaming experiences in the fourth installment of her "Ancient Mirrors" series. Continuing to weave elements from her gaming experience, "Quondam" follows Cwen of Aaradan, who falls through a mysterious portal into Quondam and must battle to unseat the evil wood nymph queen. "Quondam" received the 2008 National Indie Excellence Award in the fantasy and sci-fi category.

Gibson is an accomplished author who often appears at conferences, including Wordstock and the South Coast Writers Conference. A regular guest on KGBR-FM, she has been featured in FortWorth Child, Fayetteville Observer and Grandparents.com. She currently lives in Port Orford, Ore., with her husband, a pet cockatoo and five sugar gliders -- a small type of marsupial. To learn more about the first three books in the award winning "Ancient Mirrors" series, "Dragon Queen", "The Wrekening" and "Damselflies", visit Jayel Gibson's Tales Touched by Magick.

To schedule an interview with Jayel Gibson or request a review copy of "Quondam" please contact Shelby Sledge, Publicist at (512) 478-2028 ext. 227.