US Lacrosse has announced that Mike Pressler will serve as the head coach for the U.S. men's lacrosse team that will compete in the 2010 Federation of International Lacrosse (FIL) World Championship in Manchester, England. 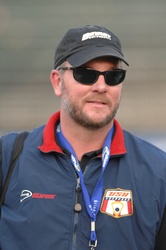 Mike Pressler was named the head coach for the U.S. men's lacrosse team that will compete in the 2010 FIL World Championships

US Lacrosse has announced that Mike Pressler, a former U.S. team assistant coach and the current head coach at Bryant University, will serve as the head coach for the U.S. men's lacrosse team that will compete in the 2010 Federation of International Lacrosse (FIL) World Championship in Manchester, England.

Pressler was an assistant coach for the 2002 U.S. team that won the International Lacrosse Federation (one of two organizations that merged to form the FIL) World Championship in Perth, Australia.

Pressler has had a very successful career as a collegiate lacrosse coach, compiling a record of 229-102 in 22 seasons. Bryant has gone 25-8 under Pressler the last two seasons, reaching the NCAA tournament for the first time in school history this past spring. Prior to that, he won more than 150 games at Duke, leading the Blue Devils to 10 NCAA tournament berths and a trip to the NCAA championship game in 2005. He also had successful stints as a head coach at Ohio Wesleyan and VMI.

"US Lacrosse and our Men's National Teams Committee are very enthusiastic about the appointment of Mike Pressler as the 2010 U.S. men's team's head coach," said Jody Martin, Men's Division director for US Lacrosse. "We feel very confident that Mike is the right guy to lead our quest to win the gold medal in Manchester."

"The committee did an excellent job and we were very impressed with the pool of candidates that stepped up this time," said David Urick, chair of the coaches selection committee. "We were certainly very impressed with Mike's professionalism and more importantly, his excitement and enthusiasm for the position. He can't wait to get started and has put a lot of thought into it already."

"This opportunity to be the head coach of Team USA is the greatest honor of my professional career," said Pressler. "The U.S. is certainly the underdog going over to England and this will be the ultimate challenge for the Team USA coaches."

The U.S. team won the silver medal at the 2006 ILF World Championship, the first time it had not won the gold medal since 1978 at the quadrennial event. Canada defeated the U.S. 15-10 in the 2006 championship game, snapping a 38-game win streak in international competition.

US Lacrosse is now soliciting applications for the assistant coaches for the 2010 team. Individuals who wish to apply should email a cover letter, a resume and three references, including their contact info, to mensdivision @ uslacrosse.org by Friday, September 26. Tryouts for the team will take place in the summer of 2009.

STX Lacrosse is the official exclusive equipment and apparel supplier to the US Lacrosse Men's National Teams Program. Learn more about the company by visiting its Web site at http://www.stxlacrosse.com.

US Lacrosse, a 501(c)(3) corporation, is the national governing body of men's and women's lacrosse. US Lacrosse has more than 260,000 members around the country. To learn more about the organization, please visit its Web site at http://www.uslacrosse.org.