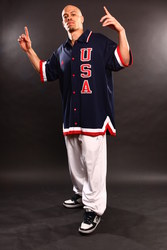 Finally! not one of those slow ushy-gushy sappy lets all hold hands Obama songs finally!

Big Hit Buda releases his new video, "Elect Obama (remix)" on YouTube. The video is in support of Senator Obama and his candidacy for the President of the United States.

The video was filmed at the Vice Presidential announcement rally, Saturday August 23, 2008 in Springfield, IL and at several locations throughout Chicago in the following weeks. The MP3 audio track of the video available is as a free download at the website, ElectObamaToday.com. The lyrics are also available there.

According to ElectObamaToday.com, two things stand out that make this video special. The first is the lyrical content. It gives concrete reasons, why people should elect Obama, The second is the performances of the artists involved. The original music composition provides the foundation for the song. The energetic performances and lyrics all combine to produce powerful musical and visual content. This is sure to pump up any crowd and convey a strong political message.

"Elect Obama (remix)", produced by TiL Dawn Productions, has received high praise from fans across the spectrum of music genres. It transcends, age, economic and color barriers. Here are some comments from viewers:

"Finally! not one of those slow ushy-gushy sappy lets all hold hands Obama songs finally!" said one viewer.

"BigHitBuda, I love your passion and energy. Hip Hop is not my favorite genre but this is awesome. Excellent camera work, professional audio..." said another.

And there was this, "Absolutely Fantastic, as an old white guy this is the first rap song that I have ever liked, liked hell, love it."

The video has enjoyed a very high approval rating.