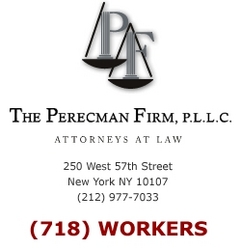 John McCain has spoken often of supporting tort-reform in his stump speeches, which in part is shorthand for getting legislation passed that weaken workplace safety laws.

The McCain campaign's angry reliance on personal attacks to discredit the reputation of its democratic presidential rival in many ways resembles the deceptive tactics used by neo-conservative, anti-worker organizations and business groups, like Unshackle Upstate, that lobby Albany relentlessly in an effort to undermine the integrity of labor laws that protect the health and safety of workers on construction sites, charges David Perecman, a leading New York City construction accident attorney who has spent the better part of his career defending the civil rights of construction workers in the state.

"The intent of the ongoing Republican-led attack on 240," he explained, "is to amend and weaken legislation under the guise of making New York State a 'stronger place to do business.'

The proposed changes to the New York State labor law would allow juries to shift the burden of blame to provide a safe workplace from the contractor to the worker."

According to Perecman, one decision by an appellate court in March 2007 went so far as to say that if an employee did not have access to safe equipment on the worksite, and went ahead and used what was provided by the owner, or the contractor, or by his employer, the worker bore the responsibility if he was injured on the job because he should have waited until the proper equipment was delivered from another location.

"Can you imagine some poor worker complaining to his boss that they only have dirty, slippery ladders, when the job requires clean ones," Perecman asked. "In real life, if a worker dared say he will wait for a clean ladder it would be bye-bye job."

Republican opponents of sections 240 and 241 of The New York State Labor Law argue that these statutes establish an absolute liability standard on any contractor or property owner for a fall from any height by an employee, regardless of fault, and that the law deprives owners and contractors of their right to defend themselves against such claims.

"This is an erroneous interpretation of the statue," Perecman exclaimed. "Regardless of what the so-called pro-business lobby would have you believe, juries in New York State are free to consider whether an employee's own negligence caused the fall and subsequent injury and to throw the case out if the sole cause of the accident is the worker's behavior.

As Chairman of the Labor Committee of The New York State Trial Lawyers Association, Perecman and members of his committee, including other New York construction accident attorneys, go to Albany several times a year to meet with republican and democratic lawmakers to discuss proposals that could affect the health and safety of workers on construction sites.

"In my experience as far as the state goes," Perecman explained, "when more conservative-minded judges are appointed to the appellate courts, as was the case during the Pataki years, it results in a spate of anti-worker decisions that wreak havoc on workers' civil rights. Pro-business judges who shape and make the law, make it harder for an injured worker to get the justice in court that he or she deserves.

"Legislators often follow their party lines," he added. "The only real watchdogs for the workers are the trial lawyers. The unions have good intentions, too. But, for the most part, unions are more in tune with issues such as wages, benefits and getting work for their members. It's hard for them to keep up with the case decisions and efforts being made to weaken worker safety laws."

Perecman cautions that while a worker might agree with elements of a candidates platform, he or she should take the time and more carefully consider how a candidate might vote on issues that could effect the health a well-being of the worker and his or her family in the event of an injury.

"Like George W. Bush," the New York construction accident attorney said, "John McCain has spoken often of supporting tort-reform in his stump speeches, which in part is shorthand for getting legislation passed that weaken workplace safety laws."