To make good on a promise, Lisa Loucks Christenson, Wildlife Artist and host of Lisa's Walk The Talk Show presented Charlie Daniels a Limited Edition, number 1 of 3 giclee prints titled, Daniels Charlie to the country legend just before a stellar performance Saturday night in Wisconsin Dells, WI. The Eaglet was named for Charlie to honor him for his work and support of our troops. 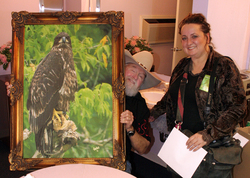 They say, eagles are messengers of Heaven, and after four years and watching over 15 eaglets fledge, I'm convinced they are. I learned while speaking at the National Eagle Center's Deck Opener this past November 1, 2008, that even the Lakota Indians believe that the eagles fly the highest of all our birds, and bring back messages from beyond.

Just before a stellar performance at the Crystal Music theatre in the Wisconsin Dells, WI, on Saturday, November 15, 2008, Charlie Daniels posed with Lisa Loucks Christenson, author-wildlife artist and host of Lisa's Walk The Talk Show after she presented him with her signed, Limited Edition, giclee print, titled "Daniels Charlie" from her bald eagle documentary project, Year Four Dancer & Daedee: Snow Falling on Eagles. Charlie was given the first giclee print to sign or leave unsigned, and then Charlie signed the remaining two giclee art prints. One will hang on the walls of her Rochester, Minnesota gallery and rotate to her Stockholm, Wisconsin gallery next year, the remaining print will be on display at The National Eagle Center in Wabasha, MN along with her Bald Eagle Documentary and Winter Bugs! Exhibits currently on display there.

During an interview for her year two season premiere, Support our Troops broadcast, she promised Charlie that she would name the firstborn eagle after him during the next nesting season if she continued the eagle documentary a 4th year, except all eagles on that nest started with the letter "D" so his name will be Daniels Charlie to honor him for all he has done for the world and our troops with his music. In April 2008, after almost 100 days of waiting through blizzards, snowstorms, and nest building, incubation, Daniels Charlie was born during a sleet storm in the minus 30 degree temperatures. The oldest twin of two eaglets, Daniels sibling eaglet was named DODEE Brian Michael, America's eagle, who represents our servicemen and woman serving and an eagle to be a messenger of love to families who had lost a loved one.

Lisa Loucks Christenson said, "They say, eagles are messengers of Heaven, and after four years and watching over 15 eaglets fledge, I'm convinced they are. I learned while speaking at the National Eagle Center's Deck Opener this past November 1, 2008, that even the Lakota Indians believe that the eagles fly the highest of all our birds, and bring back messages from beyond."

Lisa asked Charlie to bestow names beginning with the letter "D" for the Year Five Dancer & Daedee: Gifts of our Eagles project eagles, if any are born this next year they will be given the names he selected. Lisa will begin her year five documentary in January 2009. The eaglets names from her eagle pair Daedee and Dancer, mother and father, will be announced on her blog: http://www.LisaLC.com.

Lisa's Bald Eagle Documentary has been featured in local and regional news, television and papers, and her private lives of bald eagles exhibit is on display at The National Eagle Center. Lisa has written four books on the eagles and has recorded over a million images, and 400 hours of bald eagles private lives from nest building, to courtship, rearing and the relationships after the eagles fledge. Year Four Dancer & Daedee: Snow Falling on Eagles will be released in January 2009.
About Lisa's Walk The Talk Show Lisa Loucks Christenson, the host of Lisa's Walk The Talk Show brings to the listening audience heart-to-heart stories on real people and places that reach deep inside the lives of those she interviews by way of her easy, approachable, down-to-earth style that is classically, "Lisa." Lisa delivers what has been described as "honestly-real", life stories on the lives of celebrities, entertainers, authors, artists as well as various untouched topics, and overlooked travel destination hot-spots. Every song, every author, every person or place have a story. Join Lisa each day as she brings you an inside look at the stories behind the songs, people and places. Come and meet the authors, business owners, entertainers, celebrities, songwriters and artists who have played major roles in history and the traditions of business, music, entertainment and the arts - from indie artists, first-time authors, new leaders, to legends.

Agents, Artists, Authors, Labels, Foundations, Businesses, and Publishers who wish to be considered for upcoming broadcast can submit to send a review copy, email, to: