The use of "brain enhancing" drugs is increasing at an alarming rate yet a superior, simpler, natural solution exists: a treadmill desk. 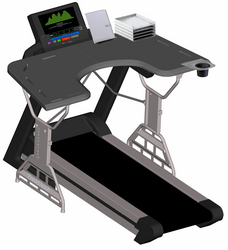 Purported "brain enhancement" drugs such as Ritalin, Modafinil, and Cephalon have seen a 300% rise in use in the United States during the past decade according to the National Institute of Mental Health. This dramatic rise in use is driven by healthy individuals seeking to gain a competitive edge and boost performance at work or in school, undeterred by potential long term risks. A company based in Phoenix, Arizona is promoting a safer, more effective means of achieving these brain enhancement performance goals: a treadmill desk.

In an opinion piece published in the journal Nature several scientists and professionals are arguing for the recognition and promotion of these drugs as brain enhancers despite the potential risks of dependency and lack of long term health impact studies.

"This commentary ignores recent studies that show Ritalin to be ineffective in performance enhancement over a three year period and harmful to growth and development in children, yet somehow these drugs are now considered the magic bullet for adults? It should raise alarm bells," states Steve Bordley, President of TrekDesk, a treadmill desk manufacturer. "None of these medications can make the claim that they boost memory and cognitive abilities, increase the amount of small blood vessels in the brain as much as 43%, or reduce the incidence of stroke, dementia or Alzheimer's over the long term. But a daily walking regimen accomplishes this without any potential risks and a long list of additional health benefits as well. You hear very little about this because no one makes any money telling you walking is the answer."

Categorizing these drugs as "smart drugs" seems to be both an oxymoron and a brilliant marketing ploy, exploiting American's drive to be at the top of their game.

So, if walking far exceeds the brain boosting abilities of these drugs, why aren't more American's changing their behavior? Bordley offers a few explanations. "Most people are unaware how powerful daily walking is for their health. If they were given the information it would change their priorities and motivations. Second, most adults are stressed for time already and and are strapped in a desk and a car for most of their day. Walking 3-6 hours a day is simply out of the question. The third reason is the lack of motivation at the end of an exhausting workday to get out and move."

Treadmill desks offer a solution to these challenges. Employees walk while they work at very slow speeds without sweating. At the end of the day they will have walked between 3-8 hours and gained energy and brain enhancing benefits naturally without pills and without any additional time burden.

Employees of major corporations are currently using treadmill desks and report gains in production and concentration in an addition to the numerous health benefits, including weight loss. "Most people focus on the significant weight loss that can be achieved on a treadmill desk but the positive effects on the brain are extraordinary," stated Bordley.
TrekDesk's website at http://www.trekdesk.com provides more detailed information on the health benefits of daily walking.