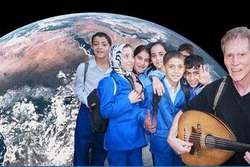 Healing with Music around the world.

The healing power of music opens the door to creating friendship across language and cultural boundaries, and has the potential to truly empower peace.

Music schools are being set up in the largest Iraqi refugee populations of Syria and Jordan by the Boulder, CO based non-profit Musical Missions of Peace so that Iraqi children can carry forward the ancient microtonal music styles and poetry of their civilization. Contributions to the group's holiday fund-raiser, the Gift of Music Project, will provide Iraqi refugee children with music lessons on traditional Arab instruments, and support infrastructure for the schools. http://www.musicalmissionsofpeace.org

The key players in Musical Missions are Cameron Powers and Kristina Sophia, Americans who are experts in Middle Eastern music themselves. Over the last six years, they have played popular Arab music in coffee houses, parks, restaurants, and in the streets as well as being featured on TV, radio and newspaper in Egypt, Jordan, Iraq, Syria, and the West Bank. http://www.youtube.com/user/MusicalMissions They played to an audience of 60,000 at a benefit for a children's cancer hospital in Cairo in 2003.

On the States-side of the "musical ambassadorship", they have shown their multi-media presentations at 200 locations in 25 states. The primary aim of the presentations is to dissolve harmful illusions on both sides of the culture gap, and to illustrate the power of music.

In the last year, developing the music schools for the displaced Iraqi population has been the organization's main focus. In Syria, with a national population of 19 million, there are upwards of 4 million Iraqi refugees. According to Zia Parker, president of the board of Musical Missions: "Music is so healing. Food and medical supplies are critical, yet the power of music has the potential to mend these children's souls. This work is so powerful because it is innately non-partisan. I don't think anyone wants the children to suffer."

Masters of Arab music have been hired by the non-profit in Syria and Jordan to teach in the newly-established schools. These students are receiving instruction on traditional instruments for maqam (traditional Arab) music such as ouds, violins, qanuns, nays, riqqs, and santours. Thus, the project serves several functions in addition to helping the children. It provides employment in a highly stressed economy, it supports traditional music which is central to Arab culture, and it extends friendship from American people to the Iraqis.

"The healing power of music opens the door to creating friendship across language and cultural boundaries, and has the potential to truly empower peace." states the non-profit's founder, Cameron Powers, who has been shaping the concept of musical ambassadorship for four decades. These music schools serving the Iraqi refugee populations are a catalyst for further endeavors in musical ambassadorship for the organization.