The Greater Houston Coin Club honored Mike Fuljenz, president of Universal Coin & Bullion, for his 20 years plus of volunteer and financial support to the Club at the 52nd Annual Money Show. 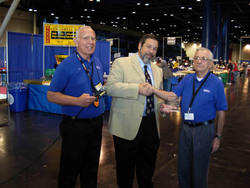 having been a teacher at a high school and a university, I truly appreciate the work and financial assistance the Greater Houston Coin Club does to promote education through money for teachers, Boy Scouts, and students.

Mike Fuljenz on Saturday, December 6, 2008 at 10:00 a.m. was presented with a plaque by the Greater Houston Coin Club for his 20 years plus of volunteer and financial support to the Club at their 52nd Annual Money Show. The show as usual was held at the George R. Brown Convention Center.

At Saturday’s 10:00 a.m. opening ceremonies, Show Chairman Carl Schwenker noted “Mr. Fuljenz has been a featured educational forum speaker at our convention for over 20 years and a strong supporter of our varied educational missions.”

Universal Coin & Bullion’s (UCB) President, Mike Fuljenz pointed out “having been a teacher at a high school and a university, I truly appreciate the work and financial assistance the Greater Houston Coin Club does to promote education through money for teachers, Boy Scouts, and students.” Fuljenz further noted “this award is so special to me to be recognized for my body of work by one of the great coin clubs in the country. It seems not long ago, 30 years ago, I was exhibiting at this convention when it was held at the old Adams Mark Hotel. This Houston Club should be proud to have grown this annual convention to be the largest in Southwest United States and one of the leading conventions of its kind in the country."

Ralph Ross, longtime club member and educator, also thanked Mr. Fuljenz and his company Universal Coin & Bullion for their support of his education through numismatics program over the years and presented him with some wooden nickels imprinted with the Universal Coin & Bullion name and the Houston Club’s motto “Education through Numismatics”. Mike Fuljenz, is one of America's foremost rare coin experts and has been honored numerous times for his philanthropy and services by both the numismatic and academic community.
The Greater Houston Coin Club’s profits from their activities including the Money Show support:
1. A scholarship program for youngsters to attend the American Numismatic Association’s one week summer educational seminar;
2. A scholarship program for middle and high school teachers to attend the American Numismatic Association’s one week summer seminar and take the “Coins in the Classroom” program. This program exposes teachers to the benefits of using a third “sense” by incorporating collectible coins and bills in the teaching of children;
3. The sponsorship of a two day mini-“Coins in the Classroom” held in association with the Money Show for teachers in the greater Texas area;
4. “Coins for A’s” program wherein children in the Greater Houston metropolitan area send in copies of their report cards with at least 3 “A’s” and receive collectable coins in return. They may send report cards for each of the six marking periods per year;
5. Financial, mentor, speaker and volunteer support of public school “money” clubs;
6. Participation in the Scout Fairs, Houston Museum of Science and other institutional events promoting the fun and enjoyment of numismatics;
7. A Speakers Bureau providing speakers to schools and other public and civic organizations to speak on subjects relating to “money.”

After the 10:00 a.m. Saturday opening ceremony honoring Mike Fuljenz was complete, the morning crowd was allowed to enter the convention hall. At 11:00 a.m. a good crowd went to Room 310-C in the George R. Brown Convention Center to once again hear Mr. Fuljenz’s educational presentation as they have since 1987. This year it was titled “Numismatic Gold Coins as an Investment and Safe Harbor”. The one hour free seminar was well received as usual and the attendees received copies of Mr. Fuljenz’s 2008 Numismatic Literary Guild Award Winning newsletter published by UCB, free.