The Ladbrokes Poker Million VII dramatic finale ended with Marty Smyth emerging the million dollar victor. The party held at top London hotel was attended by poker enthusiast model and serial WAG Danielle Lloyd and model and actress Abi Titmuss who played in a number of poker tournaments on behalf of Ladbrokes this year. 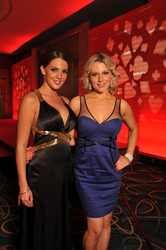 This was a thrilling format which promised lots of excitement . For the first time Ladbrokes Poker, gave players who were runners-up in their heat a second chance to get to the semi-finals as well as running two online super satellites to play in the two semi-finals.

Marty Smyth received an early Christmas present courtesy of Ladbrokes Poker after scooping the top prize of $1,000,000 in the final of Ladbrokes Poker Million VII. The final leg of the tournament was played out this week beginning with two semi finals on Wednesday and Thursday which culminated in the live final on Friday.

This was Marty's third consecutive Poker Million final table and his victory was all the more impressive, as after three hands he was down to just one set of blinds after his Ace King failed to overturn Liam's pair of Kings Last year he came second winning $500,000 and the year before he collected $100,000 for a sixth place finish.

The other two players at the final table were Kevin Allen 29 from Romford and Svein Petter Neilsen from Norway who effectively feerolled into the semi-final having won their seats via an online Ladbrokes Poker promotion.

The final table, which was broadcast live on Sky Sports on Friday night, saw Eoghan O'Dea, lose a tense heads-up battle which many expected him to win and he had to console himself with the $260,000 second place prize.

Over 400 guests attended the Ladbrokes Poker Million VII Live Final party at the Hilton London Metropole, including friends and family of the final six, poker fans and celebrities Abi Titmuss and Danielle Lloyd (who was celebrating her 25th birthday). Guests at the party were able to follow all the action on the video screens at the venue.

Edward Ihre Managing Director of Ladbrokes Poker said: "This was a thrilling format which promised lots of excitement . For the first time Ladbrokes Poker, gave players who were runners-up in their heat a second chance to get to the semi-finals as well as running two online super satellites to play in the two semi-finals."

He continued: "Marty Smyth seemed destined to win this tournament having made the last two final tables!"

The final table was deprived of poker luminaries The Devilfish, Tony G, Roy Brindley, Jonas Danielsson and the Boatman brothers Ross and Barney who fell at the last hurdle in the semi-finals.