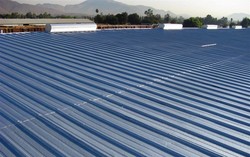 Iron Sentry is offering a metal roof leak repair system that is guaranteed to seal against roof leakage and rust. The system replaces faulty acrylic coating systems that can actually encourage decay by absorbing water and accelerating corrosion.

Jack Taylor of Taylor Scientific in Missouri says eight years ago his 20-year-old metal roofing began to leak, showing signs of rust around seam fasteners, at laps between the panels, and at flashing joints. A local contractor suggested an effective, inexpensive solution was a white acrylic surfacing.

"The installers of the white acrylic system assured me that their metal roof coating would stop the rust and seal all the leaks and they gave me a ten year warranty against future leaks," Taylor recalls. Long before the warranty was up, the roof began to leak. Contractors called in for the (metal roof leak repair) inspected the building and told Taylor the acrylic system had not been properly installed and that the warranty was not backed by the manufacturer. They sealed the roof again with an extra thick acrylic coat of acrylic.

The second coat of acrylic caused added damage as it attracted even more moisture than the first coat. The mesh fabric used for reinforcement did not expand as the thermal cycle caused the metal roofing to expand. As a result, the fabric bridges over the seams created small pockets that collect moisture and condensation that caused rust and deterioration.

Taylor then learned about the metal roof leak repair system by Iron Sentry that begins with a polyurethane sealer applied to seams, holes and fasteners. The sealer cannot be penetrated by oxygen or water, even as it expands and contracts with the weather. It's non-toxic and comes with a 10-year warranty.

Miller says all metal roof coating systems - at least the top or 'sacrificial' layer, especially acrylic - will erode due to weather. A polyurethane sealer will remain intact, but the silver or white coating that is rolled on top of the entire Iron Sentry polyurethane system may need to be replaced over time at a minimal cost.

"The Iron Sentry installers went about the metal roof leak repair by removing all the thick old fabric reinforced acrylic, cutting out and replacing badly rusted portions of the metal panels, sealing all the laps, joints and fasteners and applying a silver anti-corrosive and reflective top coat," says Taylor. "The roof looks brand new, and there are no leaks."

Douglas Glenn Clark is a writer based in the Los Angeles area.