First Significant Improvement to the Spring Floor in 25 Years. 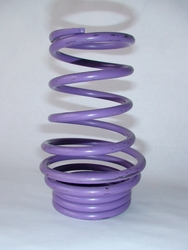 A new technology brings forth the evolution of the Floor Exercise gymnastics apparatus. It's called the Weller Spring. The intent of this new spring floor structure is to make the floor more bouncy, soften the impact of landings, and enable the gymnast to gain height when tumbling. It also eliminates the disadvantage a light gymnast has when competing with someone heavier. Most importantly, it will make performing on the floor safer. Cheerleaders, too, will benefit since they use the same spring floor. Existing spring floors can be easily retrofitted with this new invention.

In the floor exercise and cheerleading, a great deal of the athlete's performance is due, not only to their own strength and control, but additionally to the rebounding effect of the spring floor. Unfortunately, existing spring floor systems fail to provide adjustability for the different weights of athletes. Gymnasts, for example, can range in weight from sixty pounds to one hundred forty pounds or more. Heavier gymnasts get more "spring" or rebound from the spring floor because they are able to more effectively compress the floor materials. Thus, the spring floor feels bouncier to a heavier gymnast and harder to a lighter weight gymnast. The Weller Spring corrects this and allows both lighter and heavier athletes to gain rebound from the floor and get maximum performance.

The Weller Spring will help in reducing injuries. It's initially softer™ and comes up (recoils) slower.

When performing a backward tumbling take-off, the athlete experiences dorsiflexion, a movement which decreases the angle between the foot and the leg. That is, the toes move toward the shin. If this dorsiflexion is combined with an upward thrust, i.e., recoil movement, of the floor and/or an extension of the knee, a ruptured Achilles tendon and/or anterior talotibial impingement (bumping the talus into the mortice formed by the tibia and fibula) may occur. A rupture of the Achilles tendon is a debilitating injury that usually requires surgical repair and can end the career of an elite athlete.

Existing spring floors also make a cupping motion under athlete when they land. The pressure caused by this cupping results in the most force on the medial aspect of the foot. The intensity of this force on the feet, legs, and knees combined with the repetitions involved in training and competition can cause many types of injuries. Furthermore, since the existing spring floors barely compress, if at all, for a lighter weight athlete, they are at greater risk of injury.

A floor exercise routine can include three, four, or five major tumbling passes and several major dance skills, turns and leaps. In each tumbling sequence, the gymnast links several acrobatic skills in a series, which generally culminates with an acrobatic flight skill. To achieve the acrobatic skills, the gymnast must change the horizontal velocity created by the preceding linked tumbling skills into vertical velocity. This explosive movement immediately precedes the somersault and is called a "take-off."

During a tumbling take-off, a gymnast may impact the floor surface from either a forward- or backward-facing body orientation, and may rebound into an aerial somersault that rotates either forward or backward. Using high speed video, it has been observed in existing spring floors that gymnasts typically bend their knees twice during the execution of a backward tumbling take-off. This is called a "double knee bend." The first knee bend is initiated by the gymnast when executing the backward tumbling take-off. The second knee bend is not intended by the gymnast. The second knee bend is due to the recoil of the spring floor and the nature of the floor's fundamental frequency. The fundamental frequency of the spring floor is approximately twice that of the gymnast. Therefore, the floor does not move in synchrony with the gymnast's take off actions because the "rhythm" of the floor's movements are about twice as fast as the gymnast's down-and-up movements during a tumbling takeoff. This interferes with the athletes timing, causing injuries, and ultimately affecting their performance.

Over the years, as skill levels have skyrocketed in gymnastics, most of the equipment has evolved to keep up. The Uneven Bars are much farther apart to accommodate "giant swings." The Balance Beam now has a cushioning system. The Vault Table is much bigger making it safer for the vaults that nobody could have dreamed of in the early years of the sport. Some of the apparatus (Parallel Bars, Pommel Horse) does have settings that can be adjusted to the size of each gymnast. Even the scoring system has changed drastically from the "perfect ten." Now, the evolution continues on the Floor Exercise with the Weller Spring floor.

"I'm very pleased you've really followed through and appear to have a superior product.

I'd like to see the test results and study the athlete/apparatus interactions, but

NR/WEMT, Head of Biomechanics and Performance Services- Recovery Center at the

The inventor is Scott Weller of Cave Creek, Arizona and it's distributed by King Bars Sports, LLC. Weller Spring is patent pending. Go to http://www.wellerspring.com A former all-around gymnast at the University of Michigan and Arizona State University, Weller is no stranger to the sport of gymnastics. Scott also worked with former World Champion and United States Olympian Kurt Thomas in staging gymnastics shows around the country, including performances at Sea World in Orlando and San Diego. Assisting with Sun Devil Gymnastics (ASU) for the past six years, Scott also manages UandI Management Group, L.L.C., a Registered Investment Advisor firm, and UandI Productions, LLC a gymnastics entertainment firm (http://www.gymnasticsshow.com ).